I’m curious. I think BlackDragon is a faker and full of shit. His “rebuttal” to my accusation that he’s a pathetic delusional cuck was nothing of the sort. It was a squirt of squid ink: obfuscation masquerading as rebuttal.

When you’re over the target, that’s when you get the flak.

It’s one thing to read a man’s material, watch his videos, and conclude he’s full of shit. It’s quite another to watch him dissemble and run away in real time. BlackDragon made oh-so-big-a-deal about him being all about the business and that my post lead to a rapid +19% rise in his eBook sales [1]. There are also people accusing me of attacking him in an attempt to lure his Loser Club over to my business. Something rang false, again. So, I’m increasingly suspicious that the BlackDragon Alpha Male 2.0 scam is more of a Potemkin village than I’d first credited. I don’t know it is, so I’m posting this to see if my readers can confirm one way or the other.

An internet loudmouth gets 103 comments

Here are the red flags:
1. His post got 63 comments so far, of which 10 are from him. So, 53 from real people. Mine has 103, all real people.
2. His side bar claims 20,000 subscribers on his email list. That’s A LOT [2]
3. His Alexa rank is high than mine, but not massively so.
4. His SimilarWeb stats are not much higher than mine in any respect. This despite my solidly neglecting my blog while he actively curates his.

My initial conclusion is that his level or traffic and engagement does not support his grandiose image of his business. I know I occupy a tiny niche and I live comfortably but nothing to puff my chest out about. If you can throw the rock of 20,000 subscribers into a pool, I’d expect more ripples. 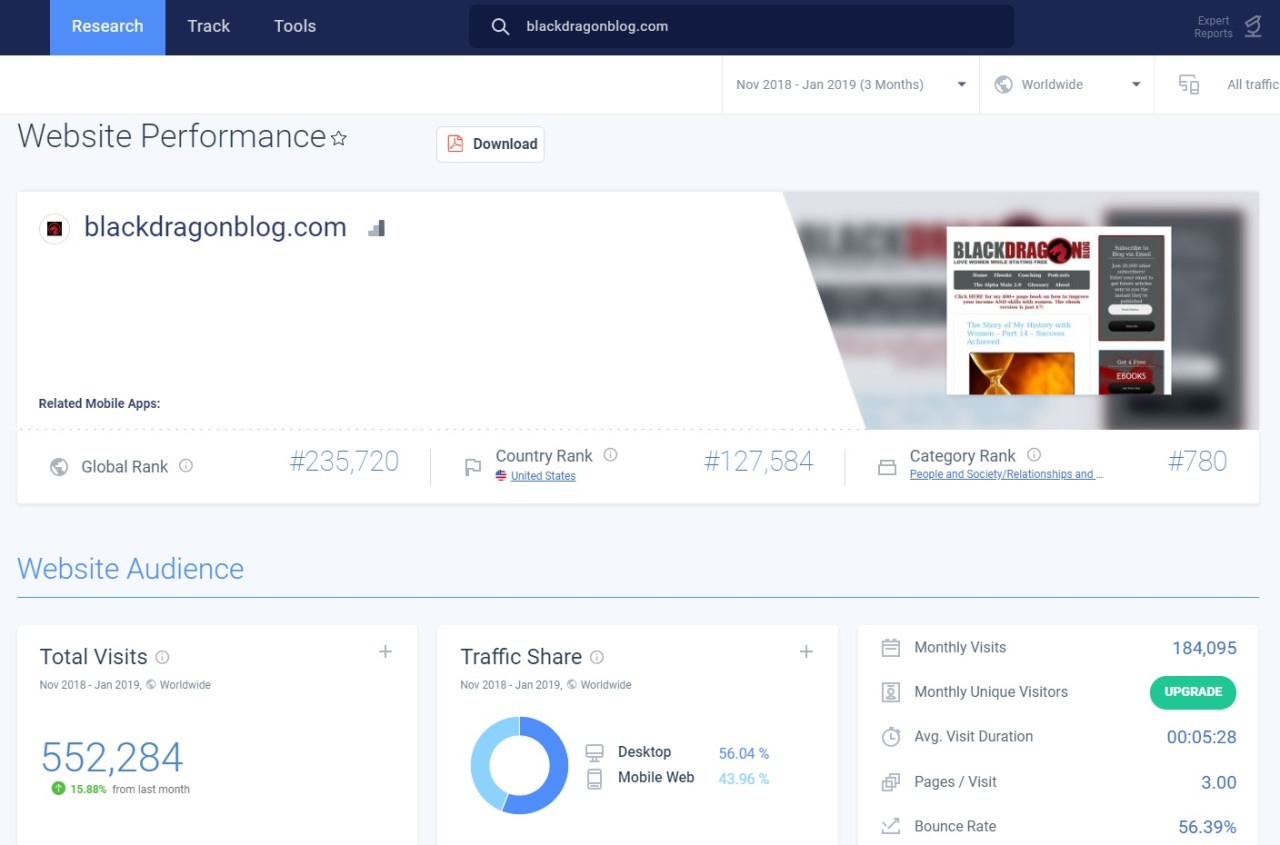 So, what’s going on? Does BlackDragon have a big successful business and it merely isn’t fully represented in his reader engagement and traffic? Or are his business claims as delusional as the claims of his sex life? I really don’t know. I’m no expert in analysing websites from a distance. Are there any experts in this area?

It seems relevant to me. This clown has the temerity to ask readers for $9597 per year to join his VIP Losers Club. I’m curious just how many suckers he’s lured into his shell game.

[1] The proceeds of which will fund him for a few more hookers. Glad to be a help to his sex life.
[2] If it were true, lol.