There is an apocryphal story of a summer day in 1870 when friends of a major short-seller, William R. Travers, got together by the shores of Newport, Rhode Island. They were admiring the enormous yachts of Wall Street’s richest brokers. After gazing long and thoughtfully at the beautiful boats, the short-seller asked wryly,

“Where are the customers’ yachts?”

The obvious implication is that the brokers get rich off the backs of their customers, and thus Wall Street is a scam [1]. This would lead you, as it did me, to expect Schwed’s book to be an indignant diatribe on the evil of Wall Street [2] but it’s nothing of the sort. This book is about farce. The central theme Schwed pushes throughout Where Are The Customers’ Yachts?, written in 1940, is that the “masters of the universe” [3] are deluded buffoons tilting at windmills. Some get rich, most don’t, but all of them are scrabbling around thinking they’ll make it big and it’s pure luck who succeeds and who goes broke. 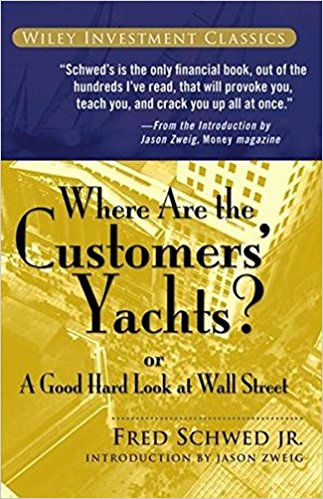 I worked in Finance. I spoke to a lot of brokers, traders, hedge fund managers, mutual managers, compliance officers, salesmen and so on. Although many were very smart and very sincere men, I came away thinking they were indeed deluded. There is no there there. They may as well be divining financial performance from animal entrails [4]. Here’s an example, where Schwed talks of chartists – a fringe element who now call themselves “technical analysts” and “swing traders”.

“There have always been a considerable number of pathetic people who busy themselves examining the last thousand numbers which have appeared on a roulette wheel in search of some repeating pattern. Sadly enough, they have usually found it.

I once suggested to a chart reader, who was explaining his theories to me, that since I wasn’t a customer he should slip me a wink. It was a social error; he was as deeply offended as if I had said something gross about his religion – which, I suppose, I had.

A busted chart reader, however, is never apologetic about his method – he is, if anything, more enthusiastic than the solvent devotee you may run across. If you have the bad taste to ask him how it happens that he is broke, he tells you quite ingenuously that he made the all too human error of not believing his own charts.” [page 37-39, excerpts]

Note the tone of Schwed’s language. He isn’t reaching any theoretical consideration on the merits or demerits of the chartist approach. He’s instead making a (facetious) factual reference that the chartists he knows personally are all broke and that their thinking is more like the religious fanatic than the dispassionate investor. He’s interested in the psychology. He’s explicitly stating that the chartist is sincere in his folly. He’s a fool, not a crook.

All that remains of my interest in financial markets is the psychology of them. It’s pretty obvious that the entire system of financial expertise is hopelessly bankrupt both morally and intellectually. This became particularly clear to me when workmates were studying for their Chartered Financial Analyst (CFA) exams. These are brutally-tough three-year exams which are a level above those who’ve already passed their Chartered Accountant exams [5]. My team were very smart young people with solid maths and lots of experience of the investment business and they all struggled to pass the CFA and spent the whole time stressed out. They’d use their annual holiday just for study and revision time. I stayed well away.

The thing is, the syllabus of the CFA is all bullshit. It’s an attempt to “do a Friedman” [6] on investment theory. It’s all built upon spurious assumptions, fake economics, and the conclusions don’t pass the smell test. Just look into the Capital Asset Pricing Model if you want to disappear down the pseudo-science rabbit hole [7].

Schwed isn’t interested in why something like the CFA is bullshit, because that’s theory. He just wants to note two things, (i) it’s of no help in making successful investments, and (ii) the people who believe in it have the psychology of deluded fools.

Most of Where Are The Customers’ Yachts? is a survey of the different participants in financial markets. So there is a chapter on financiers and seers, one on customers, one on investment trusts, one on short-sellers, and so on. Schwed considers them all fools who are easily-led and financial products little different to the wicker baskets passed around in insane asylums

Doctor to patient in room one: “Here’s some wicker, make a basket. It’s good for your inner calm and will keep you busy.”

Doctor to patient in room two: “Here’s a basket. Unravel it. It’s good for your inner calm and will keep you busy.”

Even if, somehow, there was a legitimate scientific basis to financial investment [8] you still couldn’t predict it because of PvP. In video games there are two basic forms of play: Player vs Player, and Player vs Environment. In the latter you master a skill and then beat the levels. The levels themselves remain the same so your progression in the game lies in better handling the static challenge they throw at you [9]. This is how you can go from being rubbish at Super Mario 3 to speed-running it in a snip under 51 minutes. Watch some “no hit” playthroughs of Dark Souls and Bloodborne for how much skill these people have.

Everything changes when there’s another player who has a theory of mind. Now everyone is second-guessing everyone else. Most interesting things in the world are PvP not PvE. This holds in sport too: the 100m sprint is PvE, as is most track and field, whereas the interesting sports are all PvP [10].

Schwed also goes into detail about the problem of hiring expertise. He only lightly covers the agent-principal problem, that you hire someone for help you and they instead use the opportunity to help themselves [11]. Schwed is more interested in conundrums and psychology. Here is a lengthy example:

“Let us have 400,000 men (and women) engage in this contest at one time. We line them up, facing each other in pairs, across a refectory table miles long. Each player is going to play the persons facing him in a series of games, the game chosen being a matter of pure luck, say matching coins.

The referee gives a signal for the first game and 400,000 coins flash in the sun as they are tossed. The scorers make their tabulations, and discover that 200,000 people are winners and 200,000 are losers. Then the second game is played. Of the original 200,000 winners, about half of them win again. We now have about 100,000 who have won two games and an equal number who have been so unfortunate as to lose both games. The rest have so far broken even.

[by the fifth game] these 12,500 have now won five straight without a loss and are no doubt beginning to fancy themselves as coin flippers. They feel they have an “instinct” for it. However, in the sixth game, 6250 of them are disappointed and amazed to find they that they have finally lost, and perhaps some of them start a Congressional investigation.

[by the ninth game] this little band [of a 1000] has won some nine straight without a loss, and by this time most of them have at least a local reputation for their ability. People come from some distance to consult them about their method of calling heads and tails, and they modestly give explanations of how they have acheived their success [12]. Eventually there are about a dozen men who have won every single time for about fifteen games. These are regarded as the experts, the greatest coin flippers in history, the men who never lose, and they have their biographies written” [pages 126-127]

Surely no-one is so stupid as to believe this, you may say. Well, go have a look at the marketing literature of mutual funds. Look at the league tables where each fund manager is sorted into quartiles and, if they are first quartile, they loudly trumpet it in the literature. They are telling you they won the last few coin tosses.

Schwed does hold out the theoretical possibility that performance is more than simply luck but he laments that no-one has ever been able to explain to him what that theory is.

If you liked this post, you’ll probably urge me to explain my thoughts on the recent speculative mania in crypto currency and how neatly it fits in to both Schwed’s opinion on chartists and Time Life’s on ancient shamans and diviners. It’s all about the psychology. Till then, buy Daygame Infinite. It’ll make you rich [13]

[1] No surprise it’s a short-seller who said this. Their role is to pop the bubbles of financial markets and the entirety of government, regulation, and popular mood is lined up against them. Nobody likes the child who mentions the Emperor has no clothes.
[2] And thus, likely, Jews too.
[3] As they were called in the 1980s in the time of Gordon Gecko, before Charlie Sheen had AIDS.
[4] The parallels with shamans and seers in the Time Life history of the ancient world is fun. There appears to be very little difference between them and the Wall Street shamans and seers.
[5] I guess you’d call it the Daygame Infinite to the ACA’s Daygame Mastery.
[6] Milton Friedman tried desperately to cloak the pseudo-science of Economics in the clothing of Physics by drowning it all in equations, graphs, theorems and other some such. It was an abject failure. You might as well do the same with dog-petting or poetry-recital and call those sciences.
[7] For as long as economists misunderstand what money is, they’ll get economics wrong. So long as they misunderstand human psychology, they’ll get economic prediction wrong.
[8] There is, but it’s very simple and experts can’t charge high fees for it. The value of an asset is the net present value of all future cash flows. The skill in investment is to accurately predict those cash flows and then apply a suitable discount % rate to them. The difference in those judgements of two inputs explains the whole difference in valuations of an asset. Note value and price are not the same thing – price can be influenced by other factors.
[9] Artificial intelligence will shift the dynamic into PvP if it’s good enough, in that it simulates a player who can adapt to your strategies. If the AI can’t, it’s still PvE.
[10] The acid test for PvE is “would my strategy change if my rivals change theirs?”. The 100m sprint is eight PvE races running side-by-side. No matter what the other seven people do, your strategy always remains “cover the 100m distance in the quickest possible time”.
[11] This is a huge problem in Wall Street but he doesn’t cover it because it comes under the “crook” province which is outside of his scope. A great example is how all the major broker-dealers like Lehman, Merryl, Morgan, and Bear switched from partnerships to public companies and immediately the managers began a “bankruptcy for profit” model to gouge the new owners.
[12] I don’t remember where I heard it, but I like this sentiment: “when I hear investors giving advice on how to get rich, I’m reminded of last week’s lottery winner explaining how he chose his numbers.”
[13] Nick, where are all your customers’ yachts? I’m asked.