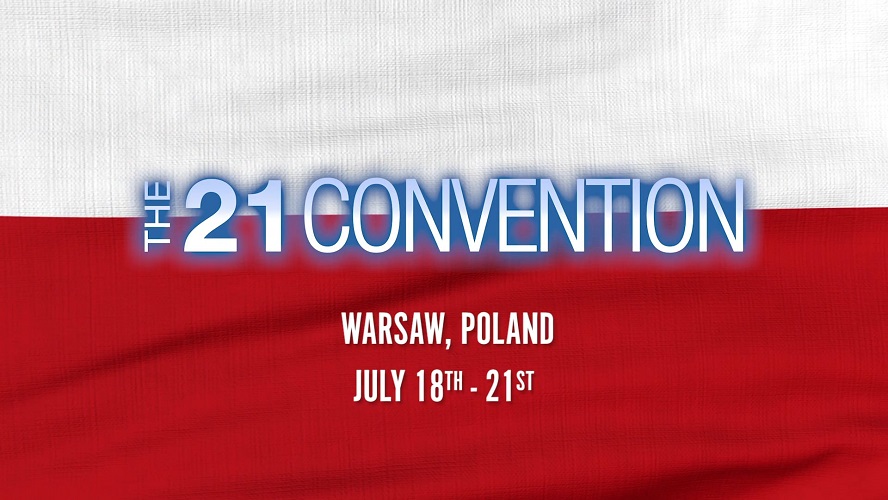 I was at The 21 Convention last weekend, in Warsaw, as a speaker. No doubt many of you are curious as to what I thought of it, not least because of the recent drama between T21C and Rollo Tomassi. Okay then, let’s do it.

Firstly, I didn’t take sides in that drama. I read what both parties had written and was able to reconstruct the events, from the so-called doxxing of the cigar club meet-up, to the Red Man Group LLC tussle, and the varied social media reaction from supporters of both sides. My conclusion was easy to reach: nothing to do with me. I like Rollo and he’s been good to me in the past. I didn’t yet know Anthony Johnson and his team but seeing as I had been invited to his show and given my promise to speak, I was going to speak.

I’m pleased to report the event weekend was a positive experience.

It was four days at the Marriot Hotel by the central station. The lectures were delivered in a big auditorium and two (or three?) smaller conference rooms were booked out for daily workshops. In addition there was a pre-show meet’n’greet in the hotel bar (I went), a paid VIP dinner (I didn’t go), a gratis Heroes dinner (I did attend), and a final farewell meal (skipped). The scheduling was intense with a couple of lectures each AM and PM, with workshops sandwiched in the middle. There wasn’t a lot of downtime.

So, how were the speakers?

Richard Grannon did several talks, the two most structured of which I very much enjoyed. One was on toxic passivity, his new concept for the West’s cultural malaise, and he drew lots of cross-disciplinary connections that I liked. His second was on evading, escaping, and recovering from toxic relationships. In both cases he was a well-prepared, knowledgeable and charismatic speaker. For me, these talks were the highlight. I also attended his workshop on the last day, which was also good. I’m amazed he didn’t drop dead from the amount of time he spent presenting.

I caught the second half of Ed Latimore‘s talk and it made me wish I’d gotten out of bed earlier to catch all of it. He was a humble, charming guy with good delivery and some interesting insights. I’d always thought his Twitter was overly-dependent upon generic bromides and platitudes so it was a nice surprise to find out there’s more depth to him.

Socrates’s lecture opened the event, which I missed because he’s a big lad and I’d talked shit about him in the past [1]. Now I think of it, I only caught half of the total talks. Probably a missed opportunity. After meeting Socrates later, I decided I’ll definitely catch the lecture when it comes onto YouTube.

My talk was a technical overview of the London Daygame Model, which all my readers will be well familiar with. It was pretty dry and there was so much to cover in an hour that I rather rushed it. It seemed to go over well, but I won’t really know what I think of it until it’s posted on T21C’s YouTube. Afterwards, George Bruno interviewed me in a breakout room and he handled it comfortably like a pro.

On the last morning, while I still lay in bed, I got Anthony’s invitation to do a Red Man Group panel broadcast live. So I jumped in the shower, pulled on my strides, and rushed out for one last unexpected contribution. It was an hour. I was sitting next to Socrates, so if you look carefully you’ll see me trembling.

So, have I deftly avoided addressing the criticisms I’d previously raised against The 21 Convention in earlier blog posts? Yes, I have. Let’s do so now. I entered the meet’n’greet on the first evening with a few preconceptions, based on the Rollo drama, watching speakers on YouTube and on social media, and word-on-the-street. I suppose you could list my criticisms as follows:

What do I think now?

Regarding price, that’s for you to decide. Tickets seem to average out at $1,499 so it’s for the customer to decide if that’s a good deal. I spent lots of time talking to audience members and none of them were grumbling about being short-changed. Quite the opposite, they seemed hyped-up and eager for more. Each day was packed with content and I felt the team were trying to provide as much value as they could. So do I recommend you go to the next one? Not necessarily, it depends who is on. Look at the speaker list and decide what you think it’s worth. In Warsaw, T21C delivered on what was advertised (subject to Rollo-related cancellations) and the audience liked it.

The speakers were of varying quality, imo. Grannon was excellent. Latimore was pretty good, and I’d like to think I was too. I missed too many talks to comment much further. There were a few duds. Ivan Throne probably shouldn’t spend so much time talking about ninja spy networks and giving generic advice. Ryan Black should stop lying about his results with women [2]. John Cooper needs to resolve his fear of rejection [3]

Though I missed talks, I did get to chat to some speakers. Socrates and Alexander Cortes both impressed me favourably in person, having more gravitas and charisma than I’d expected from the videos I’d seen. We had a good long chat. They also contributed well to the Red Man Group panel I was on. Steve Williams hosted it and he has a very engaging lively manner that is really well-suited to the role. It was fun being on there.

So, that brings me to my updated thoughts on criticism number three: is it just a cash-in? Having spoken to Anthony and watched how he and his team conducted themselves backstage, I was left with the impression that they are sincerely putting on the best shows they can and are fully-invested in the manosphere / red pill message. Sure, it’s a business and people want to get paid, but they really want their message out there.

I’ll link my three videos as and when they appear on the respective YouTube channels. So, thanks to the T21C team for having me, and no hard feelings on Rollo. I’m still not taking sides.

[1] Joking. I was badly hung over and couldn’t get out of bed.
[2] His second slide made the claim, and I quote, that after shagging just three women in his life, he went to a Sasha Daygame bootcamp and within six months had “a harem of six model-quality women who all knew about each other”. Well, Ryan, you kept them well-fucking-hidden in 2010 didn’t you? I know if I’d been rattling half a dozen models I’d have been flaunting it across the London Seduction Society like a right fucking twat. But no, you kept it so secret that not a single person in the dozens I knew in the 2010 London community can recall you ever being seen with a hot girl. You had us fooled into thinking you were just a talentless goon wandering the streets of Covent Garden doing crappy daygame. Did the models’ agency make you sign an NDA and force you to destroy the evidence?
[3] He’s got a Social Heartistry YouTube channel. You’ll soon see what I mean.