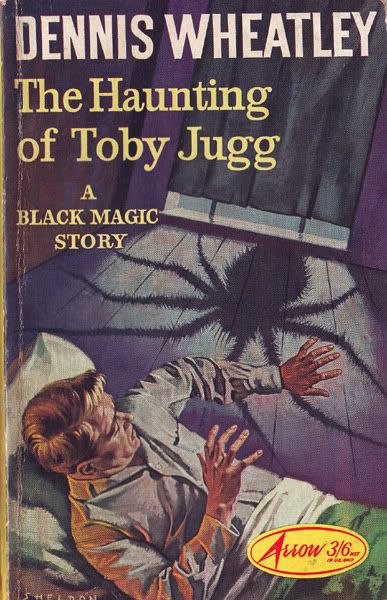 Dennis Wheatley was mostly interested in three types of story: Historical action adventure in the vein of Alexandre Dumas (e.g. his Roger Brook series), wartime spy thrillers (e.g. his Gregory Sallust and Julian Day series), and occult horror. As the cover no doubt tipped you off, The Haunting Of Toby Jugg is of the latter style. The plot is much like Stephen King’s Misery, with Satanic overtones.

Written as Jugg’s own daily diary, it begins with him terrified. Jugg was an RAF fighter pilot shot down in 1941, a German bullet breaking his back and crippling his legs. He was sent to a country manor for recuperation, staying with his old tutor Helmuth. In the last few days he’s been menaced by the midnight apparition of a monstrous shadow lurking outside his bay windows. It’s some kind of monster, though he sees only the shadow and feels the presence of Evil. Thus Jugg begins writing the diary – this book – to order his thoughts and the plot thickens over time.

Narratively, Wheatley goes in for the ‘slow reveal’. As Jugg warms to the therapeutic task of writing he begins to fill in the back story. It turns out he’s the sole heir of his industrial magnate grandfather’s vast £14m fortune (in 1942 pounds), having been orphaned since his mother died in childbirth and his father later died in an air accident. Toby’s inheritance is in trust, steered by a Board of eight trustees, until he reaches his majority aged 21. That birthday is only a month away.

Hmmmmmm. This is starting to look like more than a simple demonic apparition isn’t it?

As Toby recounts his backstory it becomes increasingly obvious that since his grandfather and father died, control of his family has been hijacked by Satanists who placed members of their cult to be his guardians, and sent him to a Satanic school in Weyland which has it’s motto the Crowleyian maxim: Do what they wilt shall be the whole of the law. 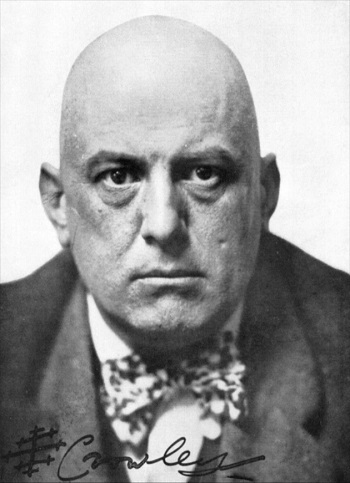 I won’t spoil the plot further (actually, I will). It’s an enjoyable book which I read in a single day and though it’s rather plodding and overlong, the fact it’s a creeping-dread story means slow pacing doesn’t really hurt it like it would an action thriller. It’s not Wheatley’s best, but it is good.

What most interested me was the meta-level. It was written in 1948 and it proves the old adage that there’s nothing new under the sun. Throughout his career Wheatley was at pains to inform his readership of the eternal battle between Good and Evil, and how the particular ideological battles of his time were simply the current recasting of that ancient struggle into modern terms. In Wheatley’s stories, murderers, Satanists, communists, and globalists are all one and the same group [1]. It’s customary for modern soyboys to poo-poo this “out-dated” attitude, because it’s now The Current Year. The thing is, Wheatley is correct. Let me go into that.

The current decline of the European Union and United Nations is not at all unexpected. I knew it would happen back in 2008 purely on economic grounds: you can’t tie the White North of Europe to the Wop South. The North is inside the Hagnal Line and has the high-IQ and work ethic of nationalities created by long cold winters. The South has DNA from outside the Line, lower-IQs and place value on ease, comfort, and massive debt. The result is that the North earns money, and the South borrows and spends it. That can’t last forever, because the North isn’t about to forgive the debts. See the past history of Germany and Greece for the most clear-cut example.

I figured that out in 2008 but I was late to the party. From the very beginning of the Kalergi Plan – the attempt to create the European Union – smart people knew it was doomed. Way back in the 1950s smart people said you can’t have monetary union without fiscal union. They said the European Common Market was but the first foot in the door for the globalists to attempt the full Sovietisation of Europe. And they were right. That was the plan all along.

The Bible tells us of the Tower Of Babel, when Satan persuaded men to abandon God, destroy the nations, and force everyone together into a single global uniformity. The European Union follows on from the United Nations and before it the League Of Nations as the latest attempt to recreate the Tower Of Babel. It’s no surprise that the EU modelled its own headquarters on the most famous painting of the Tower. There’s no “conspiracy theory” to this. They were open about it (to each other, not the public) from the very beginning. It was expressed formally in the Kalergi Plan. 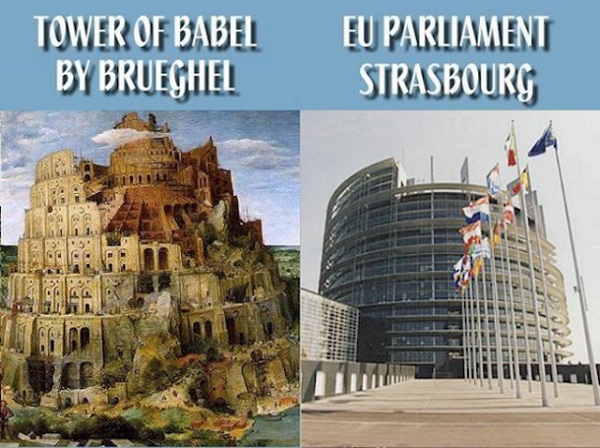 Perhaps you find this stretching credibility. Perhaps the shameless, craven, hypocritical behaviour of the media, Vatican, NGOs, EU, UN, academia and governments in response to Donald Trump haven’t yet convinced you [2]. Well, Dennis Wheatley was onto it decades ago. This stuff is eternal.

There’s a scene in which Helmuth explains the communist/Satanic Brotherhood of which he’s a member, as he attempt to recruit Toby and his millions. They are discussing the likely election of a Labour government post-war that will be full of Communist agents working for the Soviet Union [3], and how that will lead to ever-rising taxes. The theft will begin with a targeting of “The Rich”, in order to secure popular approval and begin boiling the proverbial frog.

I said that I thought, myself, all the odds were on the Socialists coming to power soon after the war; but that most of their leaders were sensible enough to realize the danger of throwing the nation’s economy out of gear by doing anything too drastic. Helmuth shrugged and replied:
“They will be moderate to start with, but as is always the case when the Left gets into the saddle, the masses expect a Silver Age – if not a Golden one – to dawn before very long. That gives the extremists a rod with which to beat the moderate. They will never be able to raise enough money by ordinary means to propiate the Labour electorate, by carrying out all the Socialist conceptions; but it can be taken from those who have it….
…. but political extremists are never statesmen, otherwise they would not be extremist. Such people allow their hatred of the rich to dominate every other consideration. And it would be done in gradual stages. That is the insidious part about it. As you say, they will go for the big fish first; and if you are forced to realize only half your holdings pay up, very few people are going to think that you have been hardly done by.
No one will squeal until some of their own savings are seized to pay the dole.”

This is of course exactly what happened post-War, with mass nationalisations and the 98% income tax rate. It’s what Bernie Sanders and his tax-the-1% gang tried. This struggle is as old as history. Wheatley continues to outline the grand plan of Evil in every facet, as applied to the Britain of the early 20th Century. The Weyland school sounds awfully like the “modern” teaching methods constantly pushed in our own schools. That school featured co-education, males and females sharing dormitories, extremely permissive sexual mores, and a teaching style opposed to discipline and where all values are relative except one: that Christianity is BAD.

Wheatley also explains the Leftist strategy of entryism. The Left are parasites and unable to create, so they must attach themselves to hosts created by real people. The Left has come after Jugg because he’s the beneficiary of a massive fortune, which the Left wishes to hijack and use to bring about communism and slavery. So, the Right built the value (his grandpa the industrialist) and the Left seeks to steal it [4]. Helmuth’s gang initially planned in recruiting Jugg by poisoning his fertile mind with a corrupt Satanic education [5] that promoted atheism, nihilism, and promiscuity. When he unexpected rebelled and joined the RAF, that institution encouraged virtues of nationalism, hard work, camaraderie, and God so they worried they’d lost him. His unexpected spinal injury gave them a second chance, so Helmuth used black magic to initiate The Haunting of Toby Jugg with the aim of softening him up again so he’d go mad, get committed to an asylum, and be unable to take control of his grandpa’s fortune. At the same time, the Satanists began an infiltration plan to place their agents on the Trust’s board so as to attain stewardship of the millions.

Oops, I spoiled the plot.

You’ll note this is exactly what the Left does now. All the major philanthropic foundations of the 19th and 20th centuries have long since been hijacked by Leftists, who use their Trustee positions to pervert the foundations directly against the objectives of the men who founded them. The Left is always about parasitism and negation: they can’t built anything of their own. All they know is how to corrupt and to steal. We see this now, for example, in sports. Feminists (i.e. the Left) don’t try to build their own women’s Tour de France, FIFA, NBA or World Tennis Tour but instead hijack the one men built and then steer it for their own purposes with bullshit women’s leagues.

You’ll note that what Lenin called “entryism” is now called “convergence” by authors such as Vox Day writing about the Leftist takeover of tech and entertainment companies. Jews have always been good at entryism because of their natural nepotism, though now the Chinese are trying it in Hollywood. Commies always be infiltratin’.

And this brings me to the central irony of the book. The Haunting Of Toby Jugg is an occultist thriller about a gang of Satanic Communists who summon a giant Spider demon in order to menace a poor cripple. And yet – there’s nothing fantastical about this story. Literally the only plot element in the entire book that isn’t clear, observable fact is the spider demon itself (which plays a small role). The conspiracy, and its ideological routes, are all real and readily observable in our own world.

The battle of Good versus Evil is eternal. We see only it’s latest incarnation.

Speaking of corruption, promiscuity, and communist countries. You’ll probably love my memoir series Balls Deep, A Deplorable Cad, Younger Hotter Tighter, and Adventure Sex and well as my notorious textbook training manuals on how to pick up skirt. Go here to check them out. Get them now, before I complete my conversion to Christianity and withdraw them all from sale. 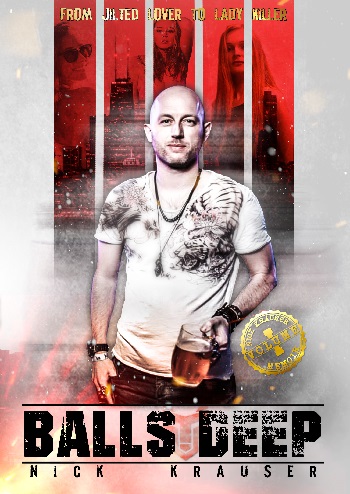 Buy this and be corrupted – coming soon

[1] As is anyone with a foreign accent.
[2] You’d have to be an absolute moron to have not noticed Trump is clearly opposed by the forces of Evil, even if your conception of evil doesn’t require a supernatural component.
[3] Which we now know is exactly what happened, as many Labour members of parliament were exposed as Soviet agents and spies.
[4] That right there is the entire crux of political science through the ages.
[5] This really is a common tactic, is it not. Remember your own school?