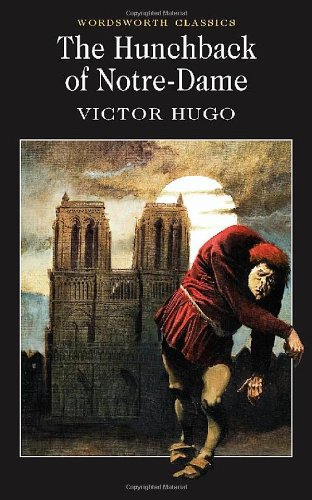 These Wordsworth Classic paperbacks are great, in my humble opinion. All the big-name classics are covered, they are a couple of quid each, and the editions are handsomely readable. In an attempt to come over high falutin’ they each have a lengthy introduction in which some ponderous academic explains the historical context and influence to the novel that follows. In this case, Keith Wren from the University of Kent tells me, “It all began with Walter Scott. So many things in the nineteenth century did. ‘The Wizard Of The North’ was the J.K. Rowling of his age.”

Apparently it was Scott who invented the modern historical novel which peaked in his 1814 Waverly, which is not – much to my surprise – all about the train station I need to get off at when applying for a Russian visa in Edinburgh. I read Ivanhoe and I’ll grant Scott was rather good. What I didn’t realise was that Victor Hugo very self-consciously emulated him and attempted to write The Hunchback Of Notre Dame as an attempt to out-do him.

I’ll say I was pleased to see Wren tell me this book is known to have very tedious stretches of architectural exposition and clunky historiography, because that’s how I’d felt reading it in places [1]. Book Three is entirely tedious and should’ve been cut completely. Hugo has a real bee in his bonnet about then-modern Paris having been rendered ugly and soulless by the effacing and demolition of all its great medieval architecture. I can only imagine what he’d think now that smelly African rapists are camped out on the Paris streets [2].

Hugo’s original French title was Notre-Dame de Paris: 1842 which makes it clear his intention was to make the cathedral the main character, not Quasimodo. Much as Ivo Andric’s The Bridge Over Drina makes the bridge the centrepiece as the tides of humanity wash back and forth across it down the ages, Hugo’s cathedral is the centrepiece of a snapshot of one moment in Parisian life.

I’ll tell you what I learned from reading this book. First, the socio-sexual hierarchy is real. Second, French people are cunts. Third, stupid women always fall for cads. Allow me to explain.

Hugo has populated THOND with a cast of compelling memorable characters who are very distinct from each other [3]. There is Claude Frollo, the satanic priest running Notre Dame, who is a textbook gamma and the primary antagonist in the novel. His adopted son and bell-ringer Quasimodo is an omega. Additionally, there is the rakish cad Captain Pheobus who is a textbook PUA, and the less-malignantly gamma playwright Pierre Gringoire. I suppose you could also call the King of Thieves, Clopin Trouillefrou a kind of dark triad alpha though his sway his limited to running the rookery from which all the street riff-raff emerge. Nonetheless, he acts alpha in his manner and leadership.

There are only two women of consequence. One is a crazy old hag who has shut herself into a walled-up room to do penance and grieve for her daughter, who was stolen by gypsies fifteen years earlier. The other is the beautiful sixteen year old gypsy Esmeralda, who lives in the rookery and plies her trade as a street dancer and performs tricks with her trained goat. Now that I’ve put those two introductions together, you can probably guess the main plot twist. It’s about as predictable as any mainstream UK or US cop show [4]

The story plays out thus: everyone is trying to bang Esmeralda and nobody succeeds. First of all is Pierre Gringoire. He’s all puffed up from having his play shown at the cathedral grand hall for visiting Belgian ambassadors, but the crowd just talk through it, incensing him. In a frightened blind melancholy he wanders into the criminal rookery and is “arrested” by ragamuffins who take him to Clopin for judgement. They are about to summarily hang him when Clopin remembers an old rule that if a women will marry him, he’s spared. Esmeralda happens along and being kind-hearted she rescues him by marriage.

Gringoire never even kisses her. It’s a Bill-Hillary type marriage of convenience. For a month he is shacked up with the little gypsy and gets absolutely nowhere. Being a whiny gamma, he runs his mouth constantly about how desperately unfair it is and eventually – I shit you not, these are the French, remember – he develops an attachment to the goat instead. So, LMR Fail #1.

Next up is Pheobus, a strutting popinjay betrothed to some young heiress with rooms overlooking the square outside the cathedral. The girls ask Esmeralda in for a dancing show but that goes awry when the gypsy and Pheobus have chemistry. Rake that he is, he has an assignation with her at the 1482 equivalent of an hourly motel room, and seems poised to seduce the virgin Esmeralda. It’s touch and go. She’s clearly enraptured by the military man.

At an opportune moment, Frollo jumps out of the closet and stabs Pheobus in the neck then runs away. LMR Fail #2. (or external cockblock, you decide). Frollo, being gamma, has admired Esmeralda from afar but also hates her, so he concocts a trap to see her hanged for Pheobus’s murder. “If I can’t have her, no-one shall” he exclaims, but only after an extremely verbose harangue about how it’s all Esmeralda’s fault really. This self-serving pomposity and self-deceit is textbook gamma, written in 1829 by a twenty-nine-year-old Hugo no less. Some things are eternal.

Esmeralda is convicted by a rigged court, as Frollo has bribed the magistrate. Once she’s banged up in the basement of the Bastille, Frollo visits and tries to blackmail Esmeralda into loving him. Repulsed by the gamma, she declares she’d rather die. So Frollo goes off on another multi-page harangue about how it’s all her fault that he’s persecuting her. LMR Fail #3.

Just before Esmeralda is escorted to the gallows, Quasimodo leaps in and rescues her, tucking her away in the belfry where she’s protected by the sanctuary laws of the time. Unlike the US sanctuary cities, she isn’t released by a Democrat governor to then rape and kill the locals, but I digress. Quasimodo has her in his lair for a month but she won’t even look at him. She’s still pining for the cad Pheobus, who survived the assassination attempt and is back at his fiance’s room overlooking the cathedral. LMR Fail #4.

This is where I swear Hugo has read Roissy. Esmeralda hectors Quasimodo to go and fetch Pheobus, which the love-struck omega does. However, Pheobus is a cad who wants no part of the complications and gallops off, so Quasimodo returns. Esmeralda dresses him down for his failure.

Yes, you read that right. A woman is rescued from certain death and given sanctuary by an omega male who doesn’t even attempt to rape her, and she bullies him into fetching a rival male and shouts at him for failing. At this point, I wanted Esmeralda to die. What an ungrateful gypsy bitch.

More stuff happens, and eventually the bitch gets what she deserves. The riff-raff storm the cathedral but Quasimodo fights them off, killing dozens, and then the King’s guard arrive to disperse the crowd. In the confusion, Gringoire (still married to Esmeralda) slips inside with Frollo to kidnap Esmeralda and spirit her away across the river, to the Place de Greve, where her execution is planned (Frollo got the King’s counsel to specially request she be broken from sanctuary and hung – gamma spite). Gringoire then slips away with the goat, abandoning his wife to her fate [5]. Frollo leaves the gypo in the clutches of the recluse woman in her cell and fetches the guard.

It’s here that the blindingly obvious plot twist happens, and mother and daughter are reunited. The King’s executioners are pacing outside the cell, thinking Esmeralda had escaped. Just as they are readying to leave, Pheobus shows up by coincidence. Having finally cheated the hangman’s noose – at the cost of dozens of men’s lives, at that – stupid bitch Esmeralda cannot but scream “Pheobus!!! My Love!!” at the top of her voice, thus giving away her hiding place.

Her mum is killed in the ensuing melee, then that dumb gypsy is hanged. Good fucking riddance, you frigid gypsy cunt [6]

I think there’s a lesson in The Hunchback Of Notre Dame for us all.

If you want a book without hunchbacks (but with at least one fiercely mis-shapen PUA) then consider my memoirs, available on Amazon and here.

As an aside, I’m sure you’ll be interested to learn than Quasimodo invented gutter-game. I mean, the 1482 Quasi, not the 2018 one.

[1] All the Wordsworth introductions contain spoilers and the reader is advised to read them last, as I do.
[2] “Kill them all, burn the bodies!” if he’s anything like me.
[3] For some reason it reminds me of how ID Software designed the monsters in Doom the same way. There’s a good analysis video about it on YouTube.
[4] The murderer is always the straightest and most right-wing-looking middle-aged white man. Because we all know from FBI statistics that it’s the successful white businessmen who commit all the gun and knife crime in USA and UK.
[5] Admittedly, she refused to consummate the marriage, so he has good reason. But balanced against that, she only married him to save his life. So, I mark gamma Gringoire as the cowardly bad-guy in this interplay.
[6] Actually, she’s a French girl kidnapped by gypsies, but frankly I don’t see the difference.