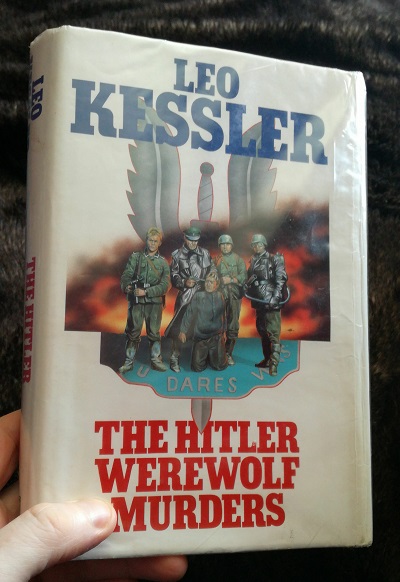 World War 2 wasn’t all fun and games, you know. I know it seemed like a great laugh, putting on your great coat, climbing into a tank, and blowing shit up. Frankly, I think I’d have a whale of a time. Thing is, I’d want to do it like I do Call Of Duty and set all the bots to recruit difficulty and have fast regenerating health.

I picked up Guy Sager’s memoir of war on the Eastern Front, The Forgotten Soldier, and got a quarter of the way through before thinking fuck this, it’s boring. Lots of tragedy and precious little fun. So instead I pull this gem from my bookcase.

Werewolves, you say? Surely you’re familiar with the werewolf women on the SS

No? How about the famous werewolf biker gangs of California?

It pains me to crush your dreams, but the werewolves of this Leo Kessler book are not shape-shifting lycanthropes but rather it’s just a tough-sounding name for a squad of assassins trained up by the SS in 1945 in a last-gasp bid to stave off Allied invasion [1]

Leo Kessler was an odd sort. He jumped on the Sven Hassel WWII bandwagon to write lurid adventure stories of German troops full of drinking, officer baiting, wenching, and hellish battles against the Russians. None of these bandwagon hoppers were real, by the way. Wolf Kruger the retired German assault captain was actually Iron Maiden-loving English horror writer Shaun Hutson. I found out Leo Kessler’s real identity in the Newcastle branch of a the Child Support Agency [2]. The woman across the desk saw me pull out a Kessler paperback at lunchtime and commented:

Turns out his real name is Charles Whiting and he’s a former military historian. I’ve got no idea if he’s a good one. When you read books like The Hitler Werewolf Murders it’s not the historic accuracy that drives you. Consider this passage:

Otto took off his leather flying helmet and clambered out of his seat. He staggered back to where they sat on their parachutes in the captured American bomber and, shouting above the roar of the engines, said: “Buckle on your chutes! Ten minutes to the DZ – dropping zone!”
They nodded and rose to their feet, including the woman.
She wasn’t pretty, but he knew under her bulky overall, she had a nice pair of tits. [page 4]

The assassination squad is thus parachuted behind American lines tasked with murdering a local collaborator in the German town. A bit later the woman has infiltrated the collaborator’s house on a reconnaissance.

She knocked on the door. There was the sound of footsteps. The door squeaked open. A pretty, dark-haired woman of her own age stood there. “Sie wunschen?” she asked politely.
Behind the maid there was a full-length mirror and she caught a glimpse of herself: tall, erect and those big breasts of hers straining to burst out of the poor synthetic material of her pullover. [page 14]

After the murder is committed, the Werewolf team is broken up by on-rushing sentries and the woman escapes into back streets then the next day she looks to hitch a ride out of town.

On the first leg of her journey she had been picked up in a jeep by a callow young Belgian soldier who had eyed those splendid breasts of hers as he had braked to a stop. [page 39]

Things turn out bad as she fails to pass a military checkpoint and is arrested in the ensuing chase through a forest. Finally, she’s held in interrogation at an American base.

He swaggered off, leaving the two of them to stare at the woman, who had risen from her wooden stool in the corner of the makeshift cell.
She was a big sturdy woman in her mid-twenties, with enormous, proudly jutting breasts and a pale, defiant face.” [page 50] [3]

Lest you think this is all about admiring the decolletage of buxom Nazi wenches, there is some story here. The Werewolves murder a half dozen collaborators so the military police of the occupying Americans is tasked with tracking down the killers. They discover there’s a training camp on the German side in a hillside castle, the Werewolf HQ. So a commando raid is planned using newly-formed SAS troopers and it all ends in a bloody catastrophe for both sides. Think of it like The Dirty Dozen or Inglorious Bastards with bigger tits.

I neither recommend nor warn against this book. It’s exactly what it sounds like and canters along at a fair pace with the usual lashings of banter, sex, and violence. It lacks the hard-bitten edge of Sven Hassel, feeling somewhat more comical. And if you can’t be bothered, try watching this for the same vibe. 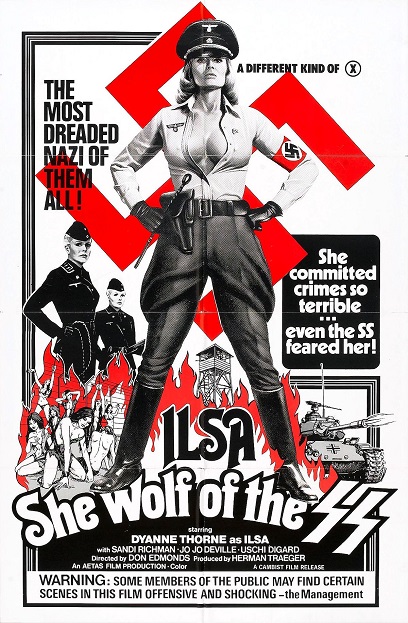 They made three sequels

If you like chasing after big-breasted wenches and fancying yourself as a member of an underground secret society, you are probably itching for a copy of Daygame Infinite which can be obtained by clicking here and sending me a pack of Ami cigarettes and three crates of 20mm ammunition for an anti-aircraft quad-cannon.

[1] I have no idea if there really existed such a squad outside of Leo Kessler’s mind. He wrote histories of the Werewolves under his real name. We can certainly hope.
[2] Long story, but I was there to do a few day’s work in the back office. Nothing to do with my own bastard kids, should I have any
[3] Big tits and mid-twenties birds. Love it.