I got my first lay of the trip a week in, on the Tuesday evening and I was flying home on the Thursday afternoon. As of Tuesday morning I didn’t know the notch was coming, so in my mind I was left with two evenings to try to get a lucky lady into my bed. I was still having trouble with flakes, likely a consequence of the town having been burned for a month straight. My strongest lead had agreed a Wednesday evening date but I didn’t want all my eggs in one basket on the last night [wisely, she cancelled at short notice]. What is the most basic advice for a player who is struggling to get results?

I did a few sets on the walk up towards the Slavia Square roundabout. I was sleepy, worn-out, feeling a bit of sunstroke so rather than force myself into a fake happy vibe I just recognised my state for what it was and matched my game to the same low energy. I was chill and laconic. Finally as I was crossing past Hotel Moskova and coming in to the plaza above Republic Square I got the familiar spider-sense. A leggy brunette was ambling past.

At first sight she seemed a typical Belgrade girl: long legs, dark hair, denium shorts, converse, tight vest. No reason to choose her over any other and no reason to expect a better result than any other, but my spider-sense had tingled. Why? I quickly realised it was her earrings – they were coloured feather like you’d see in a craft market rather than a high street store.

but with slightly longer legs and shorter hair

Girls of a slightly quirky or offbeat mentality will find a way to signal it. Often it’s a single item of clothing or accessory and it’s saying “I’m not just a standard mainstream girl”. Perhaps she has band patches on her bag, or a little metal badge. Perhaps it’s novelty socks. Perhaps she’s carrying an unusual book. Girls who are fully in the mainstream (and therefore probably trapped in the middle of The Herd) are usually head-to-toe mainstream. When I find a softener I know the girl is more likely to like my daygame, and I’m more likely to enjoy chatting to her.

So I stop this girl. She’s hot. My height, in athletic trim, and a pretty face. Twenty-two years old.

She likes it immediately, purring like a cat, and after a minute says “I’m going this way, to eat, do you want to join me?” I assent and we walk a few hundred metres to a pavement cafe. “I just ate so I’ll only have a drink. Since you’re eating, why don’t you choose” I tell her.

We sit under a canopy at the end of Knez Mihailova and I spread out into my chair and begin the idate game. It’s easy conversation and she’s not giving me any trouble. I find out she’s dating her teacher, a guy my age. That’s not the least bit surprising based on her earrings.

I know I’m under time pressure. I’ve got to either SDL her today, or get a date tomorrow. So I move things fast as we trade intrusive questions. Before she’s finished her food we’ve already gotten a lot done and I’ve told a few funny stories. The SDL evaporates when she says she’s meeting a friend up by Slavia Square in half an hour so we settle the check and I say “I’ll walk with you halfway, until I find an ice-cream kiosk” and away we go.

What to do? I have to gamble.

As I buy an ice lolly I tell her to come sit with me on a metal handrail and she comes over. I can see she’s not really wanting to leave, even though she has a pressing appointment. I decide to just Hail Mary the verbal escalation.

“Tell me the sexual thing you’ve never done, and maybe never will, but you think about it”

“Sex with two men” she replies.

“One at each end like this” I say, using gestures to describe a spit-roast. “Or one dick in your ass and the other in your pussy?”

“The second type” she says. This is less than an hour after we met. My energy is very chill and non-judgemental. I expound a little on sexual openess and then she takes her turn.

“Well, this one is half-joke and half-real. At the moment it’s just a silly idea but I think I’ll probably do it some time. Next time I suddenly come into some cash, I want to rent the penthouse suite in a hotel, buy lots of cocaine and gin, and hire ten hookers. Then I’ll run amok all night until I have a heart attack and wake up in hospital.”

We swap numbers and she wanders off to her friend. I’m strangely confident I’ll see her again, but time is running out. Later that evening I ping her on Whatsapp but she’s offline and doesn’t reply until lunchtime the next day. She says she doesn’t have mobile internet so SMS is better. See below. 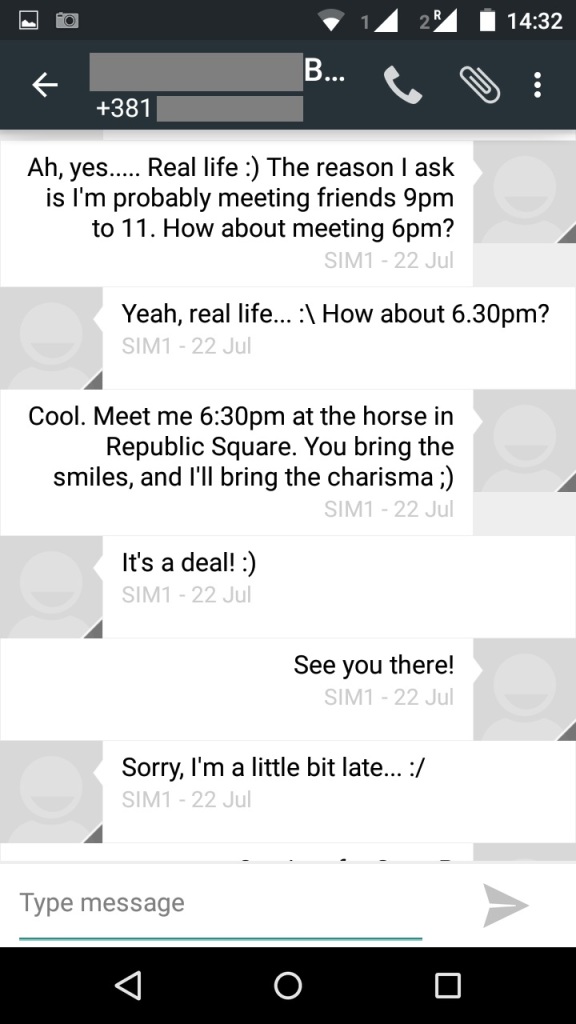 At this point my 9pm second date with the LMR girl hadn’t been cancelled, so I’m trying to squeeze in my two last shots at glory into one evening. By the time I walk up to Republic Square at half six I’m drinking in the last chance saloon. She arrives ten minutes late, dressed nice in vest and short-shorts but not especially sexual. I’m not sure how to calibrate her. So we walk off to the moustache bar again.

It’s a good date. She’s not reciprocating any kino but she’s staying there and she’s fully participating in the conversation. She was to tell me later that she was deliberately holding back compliance to amuse herself with how hard I’d try and to see if I got desperate. Evidently I passed that test.

Walking into that bar I get some good luck. There’s an old carriage mounted on blocks and they’ve turned it into a snug little place to sit, so we climb aboard and sit next to each other. I do all the usual stuff – prodding her thighs, checking her calf muscles with my hands, playing with her hair and so on. She lets it happen but doesn’t reciprocate. We drink two beers each – a good sign.

This actual carriage, but they’d removed the wooden man

Then I walk her along to Das Boot, a basement bar close to my apartment. I’d never been in before but I’m glad I went. It was empty and split into three linked rooms, so we could sit completely isolated while I drank whiskey and she sipped beer. As interesting as the conversation was, it was an ordeal because I was so focused on having to get it done tonight. About three hours in I start telling wild sex stories – lay reports, basically. Some of them are really squalid and funny, and all are wrapped up into lots of male commaraderie with my friends. She’s loving them. I figure I just have to present the extreme r-selection / travelling nomad vibe because she’s telling me she’s really into her boyfriend.

Finally I reach across the table, grab her chin, and kiss her.

She pretends to resist but I see the flush on her face and spark in her eyes. For the first time since we met I’m starting to think the lay is a very possible outcome. Finally I get her to sit next to me and lean in a bit, but there are still barriers. She’s weighing up the usual forebrain-hindbrain, ASD and value calculations. I can tell she’s loving the date and she says a few times she’s amazed how openly we can talk. 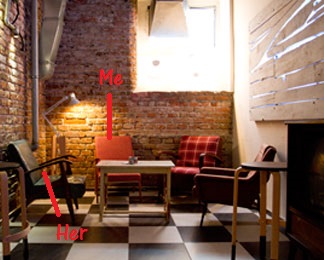 But it was a sofa the night I was there

It feels precarious but by 11pm I have to pull the trigger. I tell her to drink up and I’ll show her my apartment. She does the usual “only for a minute” stuff and walks in with me. She has a smoke outside and any time I get close enough to kiss she wanders away. She’s thinking hard, trying to decide what to do. The boyfriend is a huge obstacle.

“I want to get some cigarettes and go home. Will you walk with me?” she says and I agree.

During the short walk to the kiosks by Studenski Square I’m getting that sinking feeling of the lay slipping through my fingers. I try hard to maintain an unaffected calm demeanour but inside I’m cursing my luck – two chances to get laid tonight have turned into zero. Time to gamble again.

Well, I’d changed her mood and her mind was still in the way. I decided to logic her into bed. So on the walk up I push the adventure sex frame harder, providing her all manner of rationalisations. She tells me, “meeting you has made me realise I love my boyfriend.”

That’s a tough one. How to respond?

“That’s good, that it’s helped clear your mind. You’ve found the guy you want and you can get married, have children, and have a good life. The thing is, your body is obviously crying out for one last adventure. It’s like trying to hold your breath underwater – you can use training and mental discipline to stay under longer, but biology forces you to come up for air eventually. You will fuck at least one more guy, your body demands it, the question is just who and when. You have unfinished business.

The way I see it, you’ve got a choice. You can wait a while until you can no longer control your urges, and you fuck a local Serbian guy. Probably he’ll try to make you into his girlfriend and when you say no, he might keep calling you, or post on your Facebook wall, or just make trouble for you so people find out. Alternatively, there’s me. I’m leaving the country tomorrow. I’m English, I don’t speak Serbian, and I have zero interest in making you my girlfriend. I’m looking for simple, exciting adventure. Nothing more.”

The whole time we’re slowly walking back towards my apartment while she puffs on her cigarette, her arms folded.

“You’re obviously saying that because you want to fuck me” she retorts. It’s just a test.

“Of course I want to fuck you. I’m just saying you can do it without any effect on the rest of your situation here.”

“I don’t know. It’s not easy for me” she replies and by now I’m turning my door key and we walk back into my apartment.

There’s nothing more I can do. Kissing her, touching her up, dirty talking and so on will just make her feel pressured. More logic will be brow-beating her with the same thing over and over. She’s a smart girl with a strong rebellious streak. I just have to let her make up her own mind.

After puffing through another cigarette in the garden she comes in and sits on the bed, then lies back staring at the ceiling, perplexed. Obvously she wants sex, she’s just bothered at the thought of cheating. I lie next to her but don’t touch. My vibe is light and carefree, smiling. She looks over at me, then at the ceiling, then at me.

I mentally fist-pump. I kiss her and say “let’s relieve you of all these unnecessary clothes”

She gives me a big kiss, hops on the bus like a happy schoolgirl, and waves from the window as the bus pulls away. I walk home relieved, once more ruminating on how something as tiny as noticing one girl’s earrings can trigger a chain of events that turn a Euro Jaunt from “frustrating” to “awesome”