Even now I chuckle at the name of my new memoir. So, aside from being the satisfying end-state of a successful street pick-up, was else does Balls Deep mean?

Like most men in these parts I read Neil Strauss’s seminal book The Game and was hugely inspired. It seemed so sleazy, so underground and so…. plausible. A secret community of Pick Up Artists who had cracked the code for how a normal man can bang large numbers of hot girls. There were just a few problems:

When I grow up I want to be just like you

Anyway, luckily for me I didn’t see through the smoke and mirrors until I’d already become a daygame believer. Flaws aside, Neil’s book set me on a path to which I’m eternally grateful to him for. So, The Game was his story and nicely mythologised the 2002-era Los Angeles scene. Ten years later Tom Torero did his version, giving a window into the 2012-era London scene. That’s not as well written as Neil’s but one thing it certainly isn’t lacking is lay reports with large numbers of hot girls.

I want in on that racket.

My books have a reputation for being high-falutin’ and theoretically dense, which is how I like it. However that’s not necessarily what the ravenous crowds want. They want blood, guts… and semen stains. Most readers really connect to two things:

Yes, what the punters really relate to is the journey. The endless grind on the streets, shuffling head-down hands in your pockets through driving rain, scanning the streets for a confused-looking tourist with a backpack and Pret sandwich. Then the sporadic victory stories when you manage to hustle her into a pub, get her tipsy and bundle her into a cab for the same day lay. They know the Magic Pill marketing happy talk is bullshit.

There’s gotta be some $$$ in this racket

Every reader of this blog knows the reality. Sometimes you hit extended periods of joy and exuberance, but usually the pattern is pain-pain-pain-euphoria-pain-pain over and over again. That’s what I wanted to convey in Balls Deep – the reality of getting through your first year or two. The period where you are full of hope and drive, but also lacking the reference experiences and skills to know you’ll get there in the end. Well, I got there in the end. And for me, those first two years were rough. Really, really rough. So I’m going to tell you all about it and walk you through the minutiae of how it feels to begin the daygame journey. And then the victory stories began to trickle through. And after that the true squalor and sleaziness.

As I looked back and wrote Balls Deep I was amazed at myself. Did I really start feeling up that girl’s tits on the street outside Zara three minutes after meeting her? Did I really walk that Russian catwalk model home in an hour? How on earth did I fail to escalate that Georgian dancer with the denium shorts and crop top? More than anything, I’m amazed that no matter how many days I returned home dejected and lead-less, I was back out again to jump back in front of the bus. 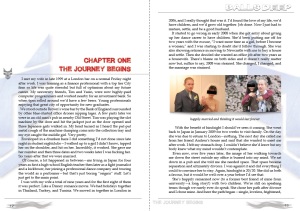 The Launch
I’m in London this weekend to film my new in-field product Daygame Overkill. Seeing as I’m in town, why not pimp out my new book too? So on Sunday I’ll hire a pub function room and host an early-afternoon launch event. Specifics aren’t confirmed yet but I’ll do a talk and probably get a fellow daygamer to do so too. I’ll have a pile of paperbacks to sell (and sign, should that turn you on). It’ll be informal, with plenty of time to hang out and chat over a beer. Maybe I’ll charge £5 cover, depends if the pub charges for the room.

Balls Deep will be £20. It’s 408 pages of filth, polished to the same standard as Mastery.

Let me know in the comments if you’re interested in (I) attending and (ii) a copy of the book. That’ll help me decide the venue size and how many copies to bring. I’ll announce details later this week.

Leave a Reply to And Wan Cancel reply