I’m always looking for the next theoretical leap forward in Game, the concept widely construed as ways of developing positive masculinity and relations with women. The latest concept Bhodi and I have been fleshing out is the meta-game of Reality Weaving. Bear in mind this is an embryonic concept so I’m using my blog to think out loud rather than presenting you will a polished end product. I’ll also be prone to flights of fancy. 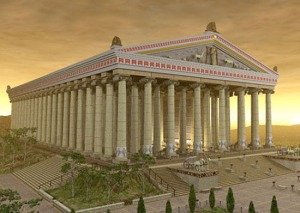 Now put a fucking awesome statue on the top

Let’s consider Game as an ancient Greek temple. Numerous pillars stand rooted into the ground upon which a roof rests. These are your pillars of masculine development which you could categorise as finance, health, career, family, friendships, lifestyle for example. When you are an unemployed loser your career and financial pillars are crumbling, or you may institute a juicing program and workout routine to strengthen your health pillars. Ever the iconoclast, over at Count Cervantes I cut the pie according to the personal qualities that emerge when all the pillars are in place, namely presence, vibe, intrigue and mastery. However you operationalise the pillars the central point is that you identify the key areas that build you as a worthwhile man and then set about strengthening your value proposition and excising the tumours. I sometimes call this “building your value”

Resting across the pillars is the roof of Game as traditionally construed. This represents your technical competence in set as expressed in what you do. Are you going out and approaching women? What do you open with? How well do you calibrate to the moment? These are all competencies which are seperately learnable (and analytical entities in themselves) but their ultimate success, their ability to facillitate drawing the woman to you, depend upon how stable the roof rests on the pillars. Put another way, if your value is low it doesn’t much matter what you do in set.

I’ve recently figured out that the temple doesn’t stop at the roof. It’s got a statue on top as the final flourish and this is your Reality Weaving. Perhaps my metaphor is limited, I’m sure I’ll eventually develop a better one, but for current purposes assume I’m essentially talking about another level of Game, something that’s analytically distinct and can be independently improved upon. This is the subject of today’s post

Reality Weaving (RW) is the set-design on the stage upon which you perform your life’s play, it’s the director who makes minor adjustments, it’s the choice of cast around you and also it is the self-talk you use to intepret it all. This will take some unpacking….

Evolution has equipped us with a logical forebrain and an emotional hindbrain. Bhodi calls it the monkey (FB) riding the elephant (HB). I think of the forebrain like a dynamic computer processor with access to numerous databanks, able to react on-the-fly to novel situations and the hindbrain as a reactive slumbering Cthulhu-eqsue monster that roars, groans and purrs depending on how it’s inertia-ridden dreams are disturbed by the happenings above the oceanline. Mostly it’s asleep but when things get too far off-course, it rises up and smashes the puny humans. Evolutionarily speaking this duality was an adaptive response to changing environmental situations. Animals directed purely by instinct can only survive in the limited environments that bred them whereas creating a delegation general purpose problem tool called the brain allows humans to live across most physical landscapes and even to reconstruct those landscapes to better fit (e.g. cutting a clearing in a forest to build huts, to dredging Tokyo Bay to make artificial islands). Human evolution went so far as to create sophisticated self-wareness which leads to two interesting points:

Interesting this presents a tension. Your hindbrain doles out rewards and punishments (in the form of happiness, excitement, satisfaction, sadness, pain, anxiety etc) for skillfully / incompetently executing his plans. This makes the hindbrain your partner, but it also makes him your enemy. Where is your loyalty? Do you really care about continuing your genetic line or do you care about being happy and obtaining the postive emotions that are doled out by the hindbrain without much care about the genetics? Much as men are attracted to the signals of fertility rather than actual fertility, I’ll propose that what we really want is happiness.

So let’s clarify – reality weaving is a tool designed to managed, control, cajole and sedate the hindbrain in order to obtain from it the positive emotions that will aid your forebrain in carrying out the forebrain’s agenda. Leave determinist thought of genetic lineage behind. I am talking about liberating the freedom of the will. Let’s bring it back to earth with an example and a metaphor: 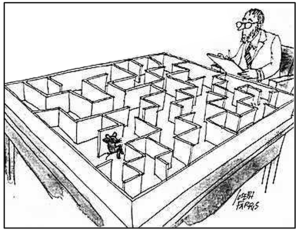 Metaphor: Your hindbrain is a hungry rat placed in a maze, the maze is the environment and your forebrain is the observing scientist who built the maze. The rat will just react to stimuli in the moment going wherever it damn well pleases on a whim. If he can smell food he’ll move towards it, if he has an electric shock behind him he’ll move away from it. At every turn the structure of the maze can channel him down particular paths which the scientist favours. Thus he who controls the maze can exert considerable influence upon he who walks through it. Consider Inception. Or Takeshi’s Castle.

Example: Imagine a fatty who eats rather too much chocolate. To remove in the moment temptation to scoff Dairy Milks the maze can be constructed in ways such as: (i) do not buy reserve stores of chocolate to keep around the house, thus increasing the likelihood that your momentary weakness passes before you put your shoes on and walk to the corner shop (ii) plot a route to work that avoids newspaper shops so you are never in a position of being able to pop in for a snack (iii) avoid the colour purple if it triggers associations with the Dairy Milk brand.

I’ve deliberately used a trite example. All three strategies are enabling the greatest powers of your forebrain (logical processing, long time-orientation) in order to make preparations while the hindbrain is asleep so that when it wakes up it’s passing fancies cannot be enabled. You make hay while the sun shines. Another example…. consider you have approach anxiety / apathy caused by the negative emotions produced by your hindbrain when walking towards girls. Two common strategies for dealing with this are:

Both strategies are classic maze-construction. In the former you are creating a sexual energy (positive) that overrules your anxiety and in the second you are creating a fear of loss (negative) that outweighs your fear of approach. Either way you are anticipating your hindbrain’s in the moment response by predeploying against it. Bhodi has my favourite version – A commitment to donate £200 to the spiteful feminist Fawcett Society if he doesn’t complete ten approaches. So that is creating a strong disgust response to overwhelm the anxiety.

These are just snippets of what a full reality weaving looks like, a glimpse of the elephants ear without seeing the full beast yet. I’ll get more into it in another post and try to lay out a conceptual model.