It’s finally here. My own Leviathan. This is my pride and joy. For the past six months I’ve been hard at work formulating my model, fleshing it out, testing it, getting fellow daygamers to review it. Finally I’m able to put into words, into a step-by-step guide, the entirety of the Krauser Daygame Model. 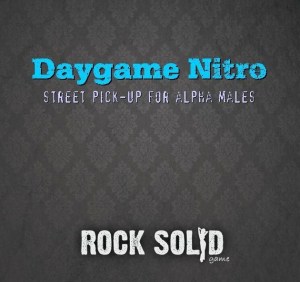 I announce to the world Daygame Nitro: Street Pick-up For Alpha Males. The definitive textbook on daygame. This is a handsome 167-page hardback edition with 35,000 words explaining how I pick up girls. Let the revolution begin!

Learn to pick up girls off the street. Stone cold sober.

In this book Nick Krauser lays out the full plan. From waking up in the morning to putting your cock inside the girl in a coffee-shop toilets, Nick guides you step-by-step through the mindsets, the values, the things to say, the ways to hold eye contact. Everything.

This is an end-to-end exposition of how cool guys pick up banging-hot girls, sweeping them off their feet and into the bedroom. It’s not what you’re thinking. You don’t need to be good-looking. You won’t be driving a sports car, and you certainly won’t be spending any money on the girls.

This is about personal charismatic value. What it is, how to build it, and most importantly how to project it to the girls.

This is the ultimate reframe. This is about hunting down the hottest girls in the world and making them feel lucky that you chose them. This is…

There will be no ebook. I have no plans to discount the price. The entirety of the book’s publishing and distribution is outsourced to Lulu, so any ordering queries should be addressed to them. All I will see is my royalties when they show up in my bank account. From order to receipt varies but seems to take 1-2 weeks. Any queries about the book’s content, put it in the comments to this post and I’ll try to answer them.