Generally speaking I avoid any book that wins a literary prize, as it’s a cast-iron guarantee that it’ll be a load of shit. I can’t speak much for the Nobel prizes for science but the fringe Nobels for Peace, Economics, and Literature are all a joke. Just look at the Peace prize roster, for instance.

Al Gore won it in 2007. What did he actually achieve in the way of peace? Nothing. But he did further the communist scam of Global Warming while making a billionaire of himself in the process scamming the taxpayer. The same year, the International Panel On Climate Change won it with him, completing a commie liar clean sweep. Obama famously won it in 2009 for doing literally nothing. He’d only just been inaugurated, and of course it’s comical now considering how many wars he started, how many kids he droned, and his active deliberate role in giving Iran nuclear weapons, shoving the Near East and North Africa into civil war, and his recent attempts to turn the USA into a totalitarian state. All the winners since him are the usual non-entity diversity candidates, the most ridiculous being the Paki bitch Malala Yousafzai whose dad was a CIA agent.

Trump ending the Korean War, crushing ISIS, taking on human trafficking, and preventing Hillary starting World War 3 against Russia….. nah, that’s not Peace Prize worthy. I needn’t go into the Economics Nobel, that’s even more of a joke. Paul Krugman won it, for fuck’s sake, a wormtongue lying Jew if ever there was one.

He awarded himself the Distinguished Service medal too

So, I tend to avoid Nobels. I broke from that lifelong pattern to read Ivo Andric’s The Bridge On The Drina after a Serb friend recommended it. It was the 1961 winner, a chronicle of Bosnian life under mostly Ottoman rule, centred around the bridge of the title in a small border town. I’ll say this: it’s well written. However, it took me two months to finish.

It’s a bit boring and aimless. Literature is always dull.

The reason The Bridge On The Drina took me so long to read was not its 473 pages. The Hunchback Of Notre Dame is longer and I smashed that in a few days. Nope, it’s because TBOTD is not actually a novel. It’s a chronicle, as Andric himself explained. What’s the difference? A novel has a plot and recurring characters within, with a protagonist and at least one antagonist. There will be intention plus obstacle. The Bridge On The Drina has none of that. Its centrepiece is the bridge itself, a long low white brick structure constructed by the Ottomans, and almost a thousand years of history washes over the bridge until the book ends with the outbreak of World War I in 1914. The Balkan Wars were in 1912 so the last quarter of the book is mostly on a war footing.

There is no central human character here. Every chapter will focus on a couple of locals and tell anecdotes from their life, all related to the bridge and each chosen to illustrate the flow of life and march of history. The main character in one chapter might appear as a minor character a couple of chapters later, and then drop out entirely. For example, a Jewish hotelier named Lotte is the centre of one chapter in 1900, describing in detail her hotel by the bridge as the lively nightlife centrepiece and her own skills in managing the ribaldry of the guests while running a clandestine support network to provide advice and support to her Jewish extended family back in her home village. A couple chapters later she reappears almost twenty years older, a tired wreck having a nervous breakdown under Serb shelling of the town after Franz Ferdinand is assassinated in Sarajevo. 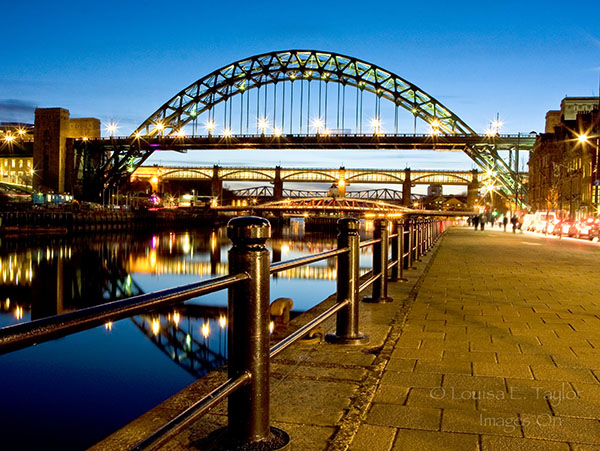 I’ll see your bridge and raise you one, pal

Lacking a central plot driving things forward, it’s easy to put this book down. Most chapters are self-contained and tie up nicely with a ribbon. There are no cliff-hangers. I thoroughly enjoyed most chapters and Andric writes beautifully but there’s very little dragging the reader forwards.

Thematically, the writing matches the central metaphor based on the river washing through the immovable immutable bridge. The fortunes of individuals, families, and the town rise and fall across centuries as the river continues to flow and the bridge always stands. Andric presents most townsfolk as dumb animals, intimately concerned with their own parochial affairs but uncomprehending of the tides of history that buffet them around. They are always subject to forces beyond control. This expresses itself in how major actions are initiated:

Andric never uses characters who are movers of history. In a normal novel, the bridge-building may focus on the engineer tasked with designing it: an Ottoman Howard Roarke, if you will. In an army it may have scenes involving generals or planners. In The Bridge On The Drina it’s the stonemasons, carpenters, militia-men, and sentries. They are all bewildered, not privy to the great plans. Everyone is passive, the river of history washing them away.

Andric is a perceptive writer on human psychology and PUA-inclined readers will no doubt recognise this character portrait from chapter 19. It’s just prior to the Balkan War of 1912 and several students are back in town after completing their studies in the major cities of Vienna and Sarajevo. They are all big-mouthed socialists of one type or the other. Two former friends are walking late one evening across the bridge. One, Stikovic, is a classic gamma who managed to bullshit a local young school mistress, Zorka, into shagging him, and now she’s fallen for him. His companion is Glasicanin who had already been friend-zoned by her and is still pining. We take up the scene towards the end, after Stikovic has been running his mouth with grand plans of revolution and Serbian sovereignty.

“Is this an allusion to Zorka?” Stikovic suddenly asked.
“Yes, if you like, let us talk of that too. Yes, because of Zorka also. You do not care a jot for her. It is only your inability to stop and restrain yourself before anything which momentarily and by chance is offered to you and which flatters your vanity. Yes, that is so. You seduce a poor, muddled and inexperienced schoolmistress just as you write articles and poems, deliver speeches and lectures. And even before you have completely conquered them you are already tired of them, for your vanity becomes bored and looks for something beyond. But that is your own curse too, that you can stop nowhere, that you can never be sated and satisfied. You submit everything to your vanity but you are yourself the first of its slaves and its greatest martyr. It may well be that you will have still greater glory and success, a greater success than the weakness of some love-crazed girl, but you will find no satisfaction in any one thing, for your vanity will whip you onwards, for it swallows everything, even the greatest successes and then forgets them immediately [1], but the slightest failure or insult it will remember forever [2]. And when everything is withered, broken, soiled, humiliated, disintegrated and destroyed about you, then you will remain alone in the wilderness you have yourself created, face to face with your vanity and you will have nothing to offer it. Then you will devour yourself, but that will not help you, for your vanity accustomed to richer food [3] will despise and reject you. That is what you are, though you may seem different in the eyes of most men [4] and though you think differently of yourself. But I know.”

That’s a remarkably insightful takedown of a PUA player by a friend-zoned chode. Here’s where Andric is particularly clever, in how Stikovic, a narcissist, reacts to it. He responds exactly as modern writers on narcissism (e.g. How To Deal With Narcissists, or Richard Grannon‘s YouTube channel) would predict: he finds the critique itself as a source of narcissistic supply:

[Stikovic] felt every harsh comment but he no longer found in all that this scarcely visible friend beside him had said any insult or any danger. On the other hand, it seemed to him that with every word of Glasicanin he grew, and that he flew on invisible wings, swift and unheard, exulting and daring, high above all men on this earth and their ties, laws and feelings, alone, proud and great, and happy or with some feeling akin to happiness. He flew above everything. That voice, those words of his rival, were only the sound of the waters and the roar of an invisible, lesser world far below him.

That’s grandiosity. The more things change, the more they stay the same. Andric can’t have been a dummy because as a writer he could’ve easily written it to be nice-guy Glasicanin who banged Zorka, but he chose Stikovic. The girl was taken in by the grandiose big-mouth [5] and no amount of reasoned argument made good the chode’s loss.

That’s just a section of one chapter. The Bridge On The Drina is absolutely chock-full of such interesting anecdotes and insights into human nature. I greatly enjoyed it, but it was a book I nibbled away at a chapter at a time, not a headlong rush to reach the climax.

If the idea of big-mouthed narcissists cucking chodes in Bosnia with nubile Balkan ladies appeals to you, you’ll very much like my memoir series. See the product page here. 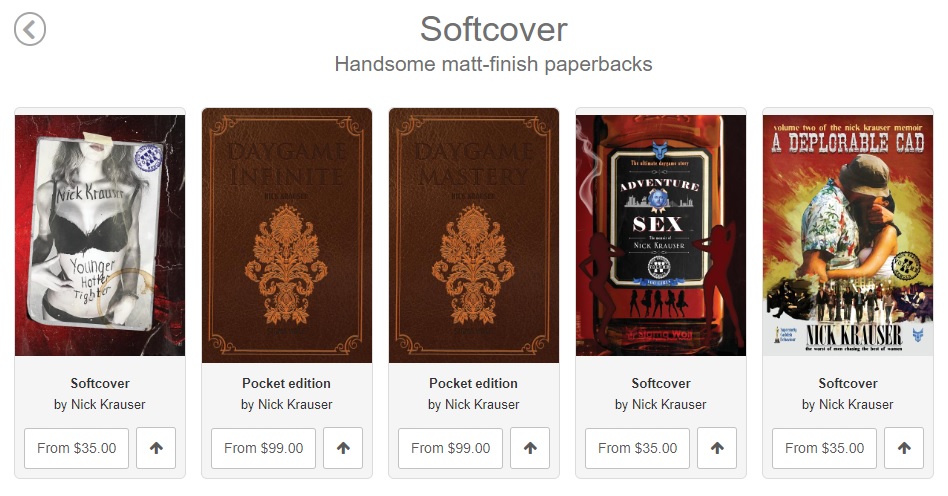 [1] Unless he was to write a memoir about it.
[2] Gamma males are terrified of being wrong and it shames them forever, thus they hold grudges forever towards anyone who publicly embarrasses them.
[3] Twenty YHT notches per year, that is.
[4] On YouTube and RVF.
[5] Well, it was always the secret to my game too.