Long before J K Rowling wrote the execrable Harry Potter series there was a real queen of children’s fiction, Enid Blyton. Whereas JKR is a lunatic leftist who frequently lies on Twitter to further global-homo causes, Blyton was a traditionalist wolf who encouraged her readers to support charities [1]. It’s clear from reading her books that Blyton was a switched-on proper person, and the proof is that Wikipedia absolutely hates her. Check this out from her Wiki bio:

Blyton’s work became increasingly controversial among literary critics, teachers and parents from the 1950s onwards, because of the alleged unchallenging nature of her writing and the themes of her books, particularly the Noddy series. Some libraries and schools banned her works, which the BBC had refused to broadcast from the 1930s until the 1950s because they were perceived to lack literary merit. Her books have been criticised as being elitist, sexist, racist, xenophobic and at odds with the more liberal environment emerging in post-war Britain, but they have continued to be best-sellers since her death in 1968.

That’s the third paragraph of her entry. In contrast, the entry for JKR is all positive and you have to skip all the way to section five to find out she’s a leftist, donated £1m to the Labour Party, and wanted Obama and Hillary in the White House. She also campaigned against Brexit. She was also pro homo-sham-marriage. What a cunt.

Not a cunt, yesterday

Blyton has sold over 600 million copies of her books, slightly outdoing JKR’s 500 million. I guess just like in Blyton’s stories, good triumphs over evil.

I read lots of Enid Blyton when I was a young kid, starting with The Magic Faraway Tree. I never really got into her blockbuster Secret Seven and Famous Five series but I did love the Secret Of and the Adventure series. I decided to return to the latter and picked up this The Island Of Adventure, the first in the series.

The first thing that struck me was the simplicity of the language. Blyton was originally a teacher and you can see her clarity of word choice in speaking to children. Her sentences are short and vocabulary limited to everyday words. This is probably just as well because The Island Of Adventure is a full-length novel so would be rather daunting for the ten year olds its aimed at.

The story is straightforward kids stuff, written in 1944 after years of war privation. A brother and sister, Phillip and Dinah, have been send to cram school in the countryside after falling behind in term time through illness. They meet another brother and sister, Jack and Lucy-Ann [2], and become firm friends. As the cram school finishes, Phillip invites them down to his guardian Aunt Polly’s run-down coastal house Craggy Tops. After a few weeks exploring they find their way to the Island Of Gloom, an inhospitable and barely accessible little isle a mile or two off the coast. There are strange goings on that draws them into adventure.

You’ll already know how the story goes because it was Enid Blyton who created all the kid’s adventure story tropes we all saw in Scooby Doo, and Jack Black in Viz. In this case there’s the grumpy odd-job man mixed up with a criminal gang, trying to scare the kids away from the island with tales of ghosts. Scooby is replaced by Kiki the parrot who imitates a human voice at most opportune times to get the kids out of tight jams. Ultimately the cops come to the rescue and the criminals acknowledge they’d have gotten away with it if not for the pesky kids. 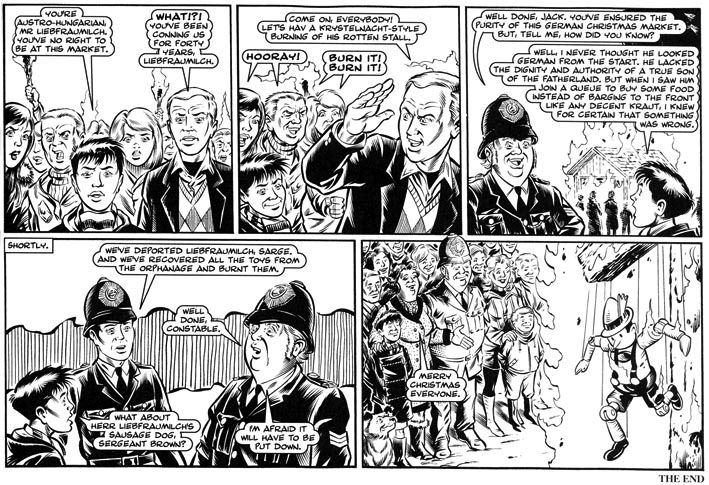 So far, so predictable.

What did surprise me on this second reading, thirty or so years after my first reading, is how bleak a picture of English life it paints. Blyton’s later Secret Of series had a group of upper-middle class kids who had servants and holidays around the world. In the Adventure series the kids are depressingly working class. And I do mean depressing.

Jack is smart but failing in school because he’s obsessed with ornithology and creepy crawlies. His sister Lucy-Ann idolises him and traipses around after him everywhere. She describes her situation to Phillip as follows:

“Kiki just picked up those sayings of hers – picked them up from our old uncle, who is the crossest old man in the world, I should think. Our mother and father are dead, so Uncle Geoffrey has us in the hols, and doesn’t he just hate it! His housekeeper hates us too, so we don’t have much of a time, but so long as I have Jack, and so long as Jack has his beloved birds, we are happy enough.”

That’s pretty rough. No friends, no home, and guardians who hate them. It gets rougher:

“Our mother and father are both dead,” Jack said. “We don’t remember them. They were killed in an aeroplane crash. We were sent to live with our only relation, Uncle Geoffrey.”…..
…. Phillip said, “We don’t have too grand a time either – but it’s better than you and Lucy-Ann have.”
“Are your father and mother dead too?” asked Lucy-Ann, her green eyes staring at Phillip as unblinkingly as a cat’s.
“Our father’s dead – and he left no money,” said Phillip. “But we’ve got a mother. She doesn’t live with us, though.”
“Why not?” asked Lucy-Ann in surprise.
“Well, she has a job,” said Phillip. “She makes enough money at her job for our schooling and our keep in the hols… She’s a very good business woman but we don’t see much of her.”
“Is she nice?” asked Jack. Never having had a mother that he could remember, he was always interested in other people’s. Phillip nodded.

Things come to a head when Phillip receives a letter at school from Dinah, who is back at Aunt Polly’s house, hinting at money troubles. So he hatches a plan that the cheque sent by Jack’s mum to the cram school teacher Mr Roy to keep her two children there could be given to his Aunt Polly to take on the job. Mr Roy was looking to wriggle out from under the responsibility anyway. Aunt Polly is a sickly tired woman who is always presented in The Island Of Adventure as put-upon and about to keel over at any moment. When all four kids show up at Craggy Tops, Aunt Polly initially wants to send Jack and Lucy-Ann back. She calls Mr Roy who tries to fob the kids off onto her.

There was another pause after Mr Roy told her the sum of money that had been sent. It certainly was a very generous amount. Mrs Sullivan (Aunt Polly) thought quickly. The children would not cost much to keep. She could see that they kept out of (Uncle) Jocelyn’s way. That girl Lucy-Ann could help Dinah with the housework. And she would be able to pay off a few bills, which would be a great relief to her.
Mr Roy waited hopefully at the other end of the wire. He could not bear the thought of having the parrot back again. Jack was bearable. Lucy-Ann was nice – but Kiki was impossible.

So throughout this story the kids are presented as lonely, unwanted, and passed around like a hot potato. Aunt Polly only takes them on because she’s paid for it. The family grown-ups barely feature. Aunt Polly occasionally fusses and worries, while Uncle Jocelyn stays locked up in his study pouring over books and doesn’t talk to the kids at all. It’s a bleak, unloving environment. Naturally, the four kids bond and hang out together – always unsupervised – on a cliff side house with a roaring sea below.

I’m not surprised they go looking for adventure.

The adventure is at the bottom of those ladders

I enjoyed this book but, being kid’s stuff, nothing really happens. They discover two secret passages, run rings around the grumpy authority figure Joe, and get excited at a chance to steal a sail boat to visit the island. For kids, this is the adventure. For me, an adult, it’s the marking time before the adventure – that never comes. I remember my imagination running wild when I first read these as a kid, so I put it down to Blyton pitching to her intended audience well rather than any defect in the book. Still, I found it uneventful so I can’t recommend it.

If you’d like to read about a cold, bleak, unloving environment full of mercenary rascals, consider my tales of Chateau RSG in my memoir series. Check out my products here.

[1] Back in the era when charities were charitable and supporting good causes. Now they are evil Marxist agit prop supporting globalism, paedophilia, and mass immigration.
[2] It’s rather unrealistic they’d become friends, because Jack and Lucy-Ann are both ginger so I can’t see how normal people would have anything to do with them.