World War II was a wonderful thing. Not so much the butchery, destruction, and surrendering of half of Europe to the Bolsheviks. I’ll admit that was rather unpleasant and I’m glad I wasn’t around to live through it. What WWII did do was inspire a ton of really cool books, movies, and video games. That’s a legacy I can enjoy.

Perhaps my second-favourite writer of all time is Sven Hassel [1]. Now, I’m not for a moment suggesting he is the best writer, just that I personally really enjoyed his books. Starting in 1953, a mere eight years after German defeat, Hassel released the first of his fourteen books, The Legion Of The Damned [2]. I’ve read them all and found only the first and last to be a bit shit. If you’re interested, start with his second book Wheels Of Terror.

As much a “Documentary” as the average PUA memoir is, sadly

They were quite a success. He sold 53 million worldwide and 15 million in the UK alone.

Hassel did a few very clever things to make his books sell. First of all, they are written in first person perspective in the memoir style and for many years he led the reader to believe they were factual [3]. In addition to this, it’s a vivid immediate style that puts you into the centre of the carnage. This makes compelling reading. The precis is he’s a Danish teenager who went to Germany early in the war to join a German foreign legion. He deserted over falling in love and was arrested and sent to a brutal military prison. The Nazis offered a way out for political prisoners, deserters and criminals by forming penal battalions who got the dirty jobs on the Eastern Front. Hassel joins one, makes new friends, and is horrified by the war. That’s where volume one ends and the rest are continuing adventures of his small band of merry men.

It sets up a neat narrative device in which a Nazi penal battalion of anti-Nazis is fighting the Allies under horrid conditions. Half the books are about the horrors of war, and the other half is R&R time back in Germany where they are drinking, whoring, and officer-baiting. Hassel deliberately removes any context from the war. The soldiers are in a permanent haze, sent into one suicide mission after another without any understanding of grand strategic objectives. It gives the books a compelling dream-like quality [4] 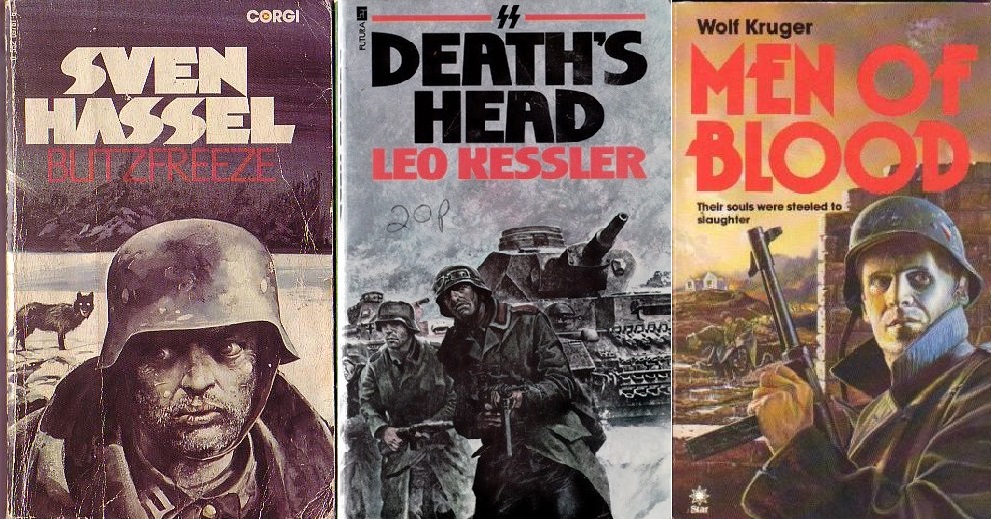 Those imitators certainly knew how to hustle

I thoroughly enjoyed these books. The characters are memorable, the war scenes exhilarating, and the officer-baiting hilarious. Once I’d finished them all I was disappointed at having no more to read. Fortunately an entire industry grew up around the Hassel style, as hack authors tried to get a piece of the bestseller action. Just look at how the covers are done to guide the reader.

I’ve tried these other writers and read some decent potboilers but it’s just not the same Hassel-like experience. They can’t match his flair or energy. While at a weekend market I was perusing a book stall of military literature when I came upon another Hassel-a-like. This one was from a tiny press, possibly even self-published [5]. It was only a few quid, so I picked it up. It sat on my shelf for a year until I tried it this year.

My first surprise is this is just the first of the Jackboot Series, the second and third in print too and the fourth and fifth forthcoming from another author [6]. I start reading. The preface explains that the author had discovered the diary of a former SS commander in his personal effects after he died in a suspicious fire. Piecing this together with known military records, Lucas reconstructed a particular real-life 1943 Eastern Front mission in which an SS group rescued the 320th Division from a Red Army encirclement. “Faction”, I believe it’s called.

I smelled bullshit. This is a variant of the Sven Hassel memoir hoax.

As I read I find it’s written like Sven Hassel, if he’d calmed down a little. It has the same brutality of war, the same pompous German commanders, the same sadistic NKVD commissars, and the same disillusioned front-line troops. Only….. the Army men are all rather more professional than their Hassel equivalents and the entire novel is firmly contextualised into the wider battle strategy.

Perhaps it’s not bullshit, I wonder.

I won’t spoil the story but suffice to say I enjoyed it and the quality of writing was far higher than I’d any right to expect from a small-run book from a tiny publishing house. It’s as polished as anything you’ll pick up in a real book store. The only real weakness is Lucas isn’t especially good at drawing characters. It takes a long time for the principle men, the commander of NKVD, of the battle group, and of the Siberian penal battalion, to take shape. They don’t leap from the page like the larger-than-life men of Sven Hassel’s work.

Throughout the book, I couldn’t help but root for the Nazis [7] but it was also hard not to root for the Russian troops too (not including the NKVD scum). I was at an emotional stalemate. It’s hard to enjoy any war book in which white people are killing white people. Especially when it’s the Jews setting them against each other.

Incidentally, this is a similar reason to why I don’t watch action movies anymore. They are just a long murder fantasy in which we’re supposed to enjoy watching our own people getting slaughtered for fun. I don’t care to play that game [8]. That’s probably why I’ve had Wolfenstein II The New Colossus sitting on my hard drive since Christmas and can’t make myself play it.

I swear, some people are shameless in their imitations nowadays

Anyhoo, something didn’t smell right with James Lucas. He was too well-informed and too sedate to be just another Hassel clone. So I looked into it. Well….. he’s German. That’s ironic considering how the Hassel Craze had English writers pretending to be German or Russian [9]. He’s also an actual military historian who has written over twenty scholarly works.

Reviews of this book seem split between whether Lucas has done an historically accurate fictionalisation of the real operation, or if he’s overly embellished it. Now that I think of it Lucas has somewhat realised the original promise of Sven Hassel – to tell a true story of the horror of war in an entertaining pulp-novel style format.

My conclusion? If you want entertainment I’d still try Hassel first, but if you want some connection to real history it’s worth looking into the Jackboot series.

If you’d enjoy a lurid first-person adventure story about a team of degenerates invading Eastern Europe for boozing and shagging, you can’t go wrong with my Daygame Memoirs. If you are more tactically minded, you’d likely prefer my strategic manual Daygame Infinite

[1] Robert E. Howard is number one. Much of his stuff is public domain now and available for free here.
[2] There are rumours his wife wrote it and he wrote the next thirteen. It’s certainly written in a different style to the others so there may be truth in this rumour.
[3] You needn’t look too far into military history to verify or disprove his claims. It’s simply impossible for anyone to survive that many battles over six years. John Wick is more plausible.
[4] And no doubt made them much easier to write by removing one of the major narrative constraints
[5] And back when it was printed, that was usually a bad sign. Different market then.
[6] It appears they never got published as I can’t find a single thing on the internet about them.
[7] Mind you, it’s hard for me to go through any day without wishing they’d won considering that the alternative was Jewish Bolshevism. I’m no fan of the Nazi’s socialism nor their murderous Teutonic supremacy, but the Soviets were bigger villains. Like Churchill said, “we butchered the wrong pig”
[8] It’s always men getting massacred, usually by a white knight protecting a woman. That’s hard to support when you’re on Team Man. In modern times it’s usually white men getting massacred, which is hard to support when you’re on Team White. And before you stupid Indian trolls get started, think how you’d feel if Bollywood created movies like John Wick where you were meant to cheer for two hours as somebody massacres several hundred men who look exactly like you. Even worse if it’s like Django Unchained. Imagine a Bollywood movie where every single Indian man is a total cunt, and then a white man kills you all, and you’re meant to cheer it along.
[9] For example, Leo Kessler is in fact Charles Whiting and Wolf Kruger is schlock horror writer Shaun Hutson.