My New Year’s resolution for 2018 was to keep a record of every book I read for the year. It’s something my brother has been doing for well over a decade and, seeing as I average at least one book a week, it seemed like a good challenge. I figured readers may be interested in my musings upon them, and perhaps Game lessons I can tease out. I don’t know yet if I’ll succeed in my ambition but I’ll give it a try and see how things go. So, starting with my first book of the year…. 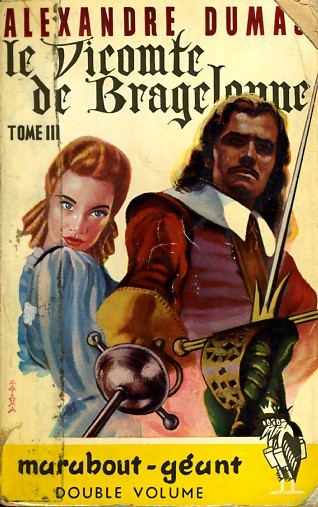 Better than the Oxford’s cover

Dumas was a rather prolific writer and a fascinating personality. He was wildly generous with money and dissolute in his ways, constantly earning and then losing fortunes. He would carouse with women, throw lavish parties, and invest in all manner of capers. He even built himself a castle-themed chateau to represent the abode of Edmund Dantes from his The Count of Monte Cristo. Dumas was larger than life and I love him for it. [1]

But it’s not his incredible profligacy that most impresses me. The guy never stopped writing, because he was always running out of money. He is supposed to have written a combined total of 650 plays, short stories, essays, and novels. Another source tells me he wrote eighty-one novels. If you check out ForgottenBooks.com you’ll see the “entire works of Dumas” are presented in thirty large volumes [3]. Just fifteen years ago some French journalist discovered an entire lost novel of his, The Last Cavalier, which is 900 pages long! He wrote so much people simply lost track of his work.

“Sorry, I’m sure I had it just yesterday”

It took me a while before I finally tumbled down the Dumas rabbit hole. Like many people, I suspect, I’d seen those big black Wordsworth Collection paperbacks on book store shelves: Dickens, Tolstoy, Swift, Bronte and so on. I often felt guilty to do so because I’d not read many classics. The English education system failed me on that score and I’d never gotten around to making up the shortfall. I was somewhat lacking in a classical education [4]

Back when I decided to embark upon my own Dantes-like Count Cervantes project to become a high value male I’d scoped out some of these classics and even got so far as to stack them on a book shelf in the Hemingway Suite [5]. One book I read then was The Count Of Monte Cristo, finishing it in Thailand in early 2012. I loved it. I absolutely adore Dumas’ style. It’s fast, it’s sharp, it’s rich with historical detail, it’s sweeping in scope and yet every chapter ends on a cliffhanger.

I looked into that and discovered Dumas wrote primarily for the burgeoning Paris weekly newspaper market who carried serialised novels at a chapter a piece. It’s good to think of them like the HBO dramas The Sopranos or Game Of Thrones. There’s an overarching story told across a long timescale but each piece of it must contain its own opening and closing loops, ending on a cliffhanger that encourages the reader to buy next week’s chapter. This means that in Dumas stories there’s always something happening and even the slower chapters, thrown in for pacing changes, still have their own arc. And yet they don’t tread water because the grander sweep of narrative action is developing. It feels epic.

I just didn’t realise how epic.

Having enjoyed The Count Of Monte Cristo I tried the next of the Wordsworth Classics, The Three Musketeers. I was already dimly aware of the story from my childhood and was pleased to find out Monte Cristo wasn’t a lucky shot. The Three Musketeers was just as good and at 592 pages / 184k words [6] it was an epic all by itself. But it’s just the first of a trilogy. I knew that because the other two, Twenty Years After (880pages/273k) and The Man In The Iron Mask (656pages/203k) were right next to it on the shelf.

Holy shit, that’s some reading to be done. But, determined to be a high value male I picked up Twenty Years After about a year ago and read it. Fantastic book. Even better than the first in the series. Three volumes, 2128k pages, and 660k words. All high quality writing too, so that’s epic. I love finding out there’s something so substantial to sink my teeth into.

However, I still didn’t realise just how epic it was.

Those three volumes are the commonly reprinted series, but the entire D’Artagnan Romances, as they are called, is even longer still. When all of the newspaper-serialised chapters are published end-to-end it comes down to FIVE volumes. For historical reasons I’ll never understand, two volumes just don’t get reprinted much. Wordsworth Classics don’t do them but Oxford World’s Classics does. And yet it’s all one long story with the same characters throughout. There’s no good reason to excise the two volumes.

Volume three in the series is The Vicomte De Brageloone (658 pages / 238k words) and volume four is Louise De La Valliere (same length again). The Man In The Iron Mask is actually the concluding fifth volume, and two are skipped entirely! [7] Seeing I discovered this while in Serbia in November and that the bookshops didn’t stock Oxford’s editions I skipped to volume five and read that. Then, after sorting out the Daygame Infinite launch I got cracking on volume three, The Vicomte De Bragelonne.

If you like epic yarns featuring a team of rascals adventuring across Europe you may enjoy The K’rauser Romances volumes one, two and four.

[1] Everything I write about Dumas here is from (fresh) memory. If you want to research it further there’s plenty of information. Just the introduction to this book’s edition furnishes a great deal of biographical analysis. I haven’t gone back to it because my priority is to write fast and loose to get the content done [2]
[2] An attitude I think Dumas would approve of as apparently he sometimes sent completed chapters to his newspaper publishers, completed by a collaborator that is, without checking them. Fast and loose.
[3] Although he didn’t write everything in that collection. I was extremely excited to see two sequels to my all-time 2nd favourite book The Count Of Monte Cristo but further investigation showed they were written by hacks and published under his name without permission.
[4] Though not the complete philistine that most of my peers are.
[5] I read a few too, but balked at War & Peace after a hundred pages when I was thoroughly bored and thoroughly confused.
[6] And takes 12 hours and 14 minutes to read according to readinglength.com which seems rather optimistic to me. I don’t like to skim books.
[7] I don’t approve of long epic stories being published across multiple volumes out of sequence. I’d never do such a thing myself.