The internet would have you believe English girls possess sophisticated anti-Game powers that make them impervious to charisma. Anyone who has actually daygamed Europe will quickly tell you English girls aren’t harder, they are just unpleasant. The moment you step out of the Anglosphere it’s like stepping out the Fat Room of a carnival Hall of Mirrors and you realise it’s not you, it’s them. Anglosphere society is broken and most women with it. 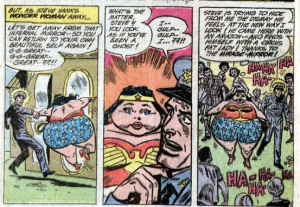 Most human traits follow bell-shaped normal distribution yet different demographics can shift the whole curve left or right (see for example IQ by country). 66% of people are within one standard deviation of the mean. For Euro-girls under thirty that mean is a high 6. For FSU-girls it’s a high 7. For Brits, Yanks, Kiwis, Saffers, Aussies and Paddys it’s a low 5. In a nutshell that’s why it behooves every man to ignore native English-speaking girls. Exercise some cultural and geographical arbitrage to up the quality of the women in your life. I avoid English women. Their voice turns my stomach. Their frumpy ill-coordinated fashion hurts my eyes. They can’t follow a man’s lead and have nothing of interest to say. In general.

Pretend you didn’t see this

So when I’m out one Saturday afternoon with Bodi near Buckingham Palace the last thing I’m expecting is to initiate an interaction with an English girl that ends with me fucking her a few days later. My vibe is still flat so when I see a Brazilian girl that’s a bit chubby for my taste but otherwise screaming to be opened I let Bodi have her. As he wanders off on an idate I hang around looking for targets. Amongst the trees outside St James Park I see a French-looking girl alone, inspecting a plaque of the local wildlife. Sorted. I open.

Incredibly she’s English. From Cornwall. I rapidly calculate that’s as far from (literally and culturally) London as a Brit can be and it shows in her vibe. She’s chatty, pleasant and (for a Brit) reasonably feminine. The set takes on that weird non-polarity English girls have where it’s chatty and fast-paced but there’s no crackle of man-woman vibe. She likes me. A Yes Girl. Text game progresses easily and I get her out a few days later…..

Me: So this is the chatty Cornish separatist 🙂
Her: Chatty? I could hardly get a word in!
Me: How memory deceives us….
Me: [next day] I’m sitting in a cafe with hot coffee and enthralling book 🙂 how are you?
Her: Sounds lovely. I’ve just had a very uninspiring Christmas lunch. Think I get to leave work early though, woo hoo!
Me: Works lunch? I get restless at those
Her: Desperate to leave! xxx
Me: Steal the mince pies and sell them to tramps
Her: I’m free! Nice plans this eve?
Me: None at all. Maybe exercise and video games
Me: Hang on… you’re cadging a date invitation aren’t you…. how smooth you move young lady 😀
Her: It may sound like that but actually I’m not free. You are very slow with your invites though. Where’s my cup of tea?
Me: Brewing
Her: Very good. I need to work on my patience!
Me: I approve

I’m really not much interested because I thought she’s a mid-6 and didn’t even have make-up on when I opened. She’s new in town and doesn’t know anyone. As 3pm rolls around my eyes wander to the darkening skies and bitter wind. I’m seriously thinking of flaking on her. Don’t care for new notches this year. I’ve had my fill. I want to go home and finish Operation Flashpoint Red River.

But no makeup and unwashed hair

But I’ve literally just finished drawing my Krauser Daygame Model flowchart for the book. Wouldn’t this be a great chance to run the model exactly as written in the model, step-by-step, with no variations. I could voice record it all and who knows, if I bang her on Day 2 it’s a full uninterrupted audio of the model *. Maybe I’ll meet her afterall. So I’m decided.

6pm in front of Top Shop on Friday evening and I walk her to a nearby tea shop. She’s hotter than I remember – a respectable seven but being English she’s still not wearing makeup and she came straight from uni with a hiking jacket, ill-fitting jeans and unwashed hair. It reminds me of one of my Serbs telling me about a day she visited her grandmother without putting on her makeup first (“How dare you come here looking like that?” Granny says, “Have some self respect, girl”).  Enroute to Venue Zero,  I actually say exactly the same dialogue examples as in my book. Over tea I follow the body language advice exactly. I bring up the same topics. I precisely monitor the energy levels per by model prediction. It’s literally textbook game. She loves it.

Being English she’s already derailing it, talking total gibberish that would quickly kill the vibe if I didn’t haul her back on track. She likes me, she just doesn’t know how to be attractively feminine – being English and all. Venue One passes the test so I walk her on to Venue Two for a bright alcoholic drink. I run the twin escalation ladders (verbal and physical) in precise order and get my amber lights. So I move her to Venue Three at a dark blues bar to run the Questions Game and go for the kiss.

Textbook. She even refused the kiss twice to allow me to do my little Recovery Loop and keep moving forwards.

The questions game starts to break the fourth wall. She’s really loving it and starting to share such as her fantasy to have two men at once, how she just got out of a long long relationship, hasn’t had sex in three months and hasn’t had good sex in over a year. She masturbated last night to the fantasy of an investment banker she’s messaged on Match.com but hasn’t even met. She’s gagging for it. Sexual and Ambient Logistics are perfect.

As we walk out up Regent Street I’m looking to flag a cab. Her next question is:

“What do you think the odds are we have sex tonight?”

Of course my first thought is they just rose dramatically. I reply.

Me: On my side it’s 100%. I’m attracted to you, I like how we got on tonight, so I want to take you home and fuck you. On your side I think it’s 70%. You want sex and you think I’m probably the right man right now but you have a few reservations. Probably you think it’s a bit fast and you are concerned about adding to your Number.

Me: Only a bit? Well, you’re a bit of a hippy. When the revolution comes we’ll be on opposite sides of the barricades

Me: Yes. Forbidden fruit is the sweetest

A cab arrives and I push her in, saying she hasn’t agreed to anything so I won’t hold her to anything. Just a drink at my place and see how we feel. Back at my place I run the Venue Four bedroom escalation model. It’s still textbook. Five minutes after sitting down she can’t hold back and jumps me, initiating the kiss. Her clothes falls to the floor in seconds and she’s on her knees sucking me off. Her body is a nice surprise – firm, flat stomach, vibrant tight skin – country living and hiking has kept her looking young. I take her next door to get the notch and that’s it.

* My phone runs out of battery midway through Venue Two.