Something just occured to me when reading Bodi’s recent post on workplace woes. He discusses the baiting tactics of office gammas and deltas and one particular tactic sprang to mind. Now bear in mind I write this from intellectual curiosity in the games people play rather than as a severe warning of a likely risk. I almost never encounter this tactic, mainly because I never let myself get drawn into the killzone of it. Unless someone can point me to psychology literature beating me to the punch I’m going to coin the term: The Bear Bait. It’s a way weak aggressive people can sway the crowd / bureaucratic institutions to dispose of a stronger opponent or to control the frame by the threat of such force. The tactic as explained from the position of the gamma / feminist aggressor: 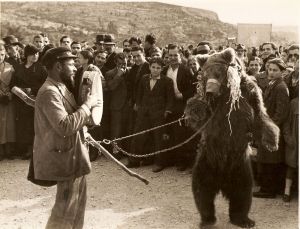 A white man at an HR diversity seminar

Gammas are often excessively helpful to other staff when it’s measurable and recordable (e.g. an email answer to a problem posed) while resentful and value-taking in mood (e.g. talking down to you as they do it). Understand their behaviour is based on denying their low SMV by constructing an elaborate delusional reality in which the world is stupid and they are better than everybody else. Thus they are stubborn and aggressive (a frame-push) but also fragile and terrified. As Ricky Raw correctly observes they don’t feel guilt, just toxic shame. So you’ll find gammas frequently glad-handing the office and conspicuously engaging in impression management.

Gammas are always looking for a recipient of their frame-push because they need to position themselves above everyone. Busybody women are always looking for an outlet for the screams of their barren wombs. If you have little involvement with these people they’ll leave you alone but if you find yourself sitting next to them or in regular team meetings you can expect trouble. Most office workers are spineless pushovers so their frame-push encounters no resistance but if you hold your frame expect them to make a project of you. This is why its best not to provide unnecessary ammunition from your personal life – don’t talk about Game, don’t offer political opinions and don’t flaunt how much better your life is than theirs – these are all digs into their toxic shame that will make them more resentful and more motivated to attack you because your very existence is an existential threat to their delusional reality.

Step Three: Engage victim in casual chat with other people in earshot

The aggressor will start chumming-up with you by making innocuous small-talk that gradually veers away from what is directly relevant to the job. Most of the time nothing comes of it except a mild pump for information to use against you later but every now and then the planets will align for them – you fall into a conversation and there’s lots of people who can overhear. Now this is when the trigger is pulled and it suddenly becomes a bait-and-switch from friendly chat to deliberate malicious attack. Precisely the reason it works is it lulls the victim into the killzone by exploiting their friendliness and goodwill.

Step Four: Utter socially-conventional (but completely untrue or nonsensical) platitude that forces victim into hard choice to either concede the frame (a) or argue a position that constitutes thoughtcrime (b)

The aggressor will accept either of two outcomes. Either you accept the frame-push, dicktuck, and can then be bled dry for fuel to power their delusional reality (that they are above you) or you resist and they try to destroy your life. Being passive-aggressive they are seeking to recruit external forces as their cat’s paw namely laws, social convention and HR departments. At a minimum they want co-workers to label you an outcast (“He’s a bit weird, that guy. A racist/sexist/bigot”) so they can use you as a foil for their own moral superiority when discussing you at the watercooler. The lottery jackpot is if they can twist something you say into an HR-actionable offence that has witnesses. Remember their reality can’t tolerate your existence outside of their frame so they will be ruthless and vindictive about it. So, examples (I lay it on thick, in practice they’ll be quite nuanced and subtle):

Him: Did you see that slavery case in the news? Three women were held for thirty years by some man. It’s horrific.

Him: Don’t you think it’s awful that in this day and age we still have slavery and sex-trafficking in the UK? Men are still able to get away with it (this is the frame-push)

You (b): Well, we don’t. These cases are extremely rare and are almost exclusively confined to immigrant populations from third-world countries. It’s not a “UK” problem (thoughtcrime)

Step Five (a): Continue to push victim by heaping more platitudes on them until receiving concession

Once they sense your willingless to submit they’ll demand total supplication because the further they beat you down the more superior they feel. Expect a long rant to consolidate their frame delivered with a watchful eye waiting for the slightest flicker in your eyes that allows them to bait you with a “don’t you think so?”. So for example:

Him: Yes, it’s terrible. There are still so many things wrong with this country from the legacy of colonialism. I think these women are very brave. The police should do more. I think those victims were ignored for so long because they are Malaysian and Irish. It’s just like the Lawrence Report said – the police are institutionally racist…. blah blah….

They know full-well they are goading you. That’s their pleasure – prodding a declawed bear with a pointed stick from safe distance.

Step Five (b): Feign incomprehension to draw out verboten opinion, making sure everyone in earshot hears and begins to pay attention.

The slightest crack in their reality causes them existential pain so if you push back at all they will try to destroy you. When you initially express crimethink they may leave you a bit more rope to hang yourself by nodding and making listening noises before suddenly raising their voice to paraphrase your opinion to the audience. Watch here for a deliberate attempt to squeeze your opinion under any thoughtcrime label e.g. racist, sexist, homophobic, right-wing, bigoted, reactionary, old-fashioned etc. Once the label is there the specifics of your opinion cease to matter and instead the “fact” of your “racist outburst” becomes part of the historical record.

Step Six: Immediately make it personal in a way that leaves victim false dilemma of either conceding frame (a) or making what can be twisted into a personal attack (b)

The next step is usually to either dredge up an identity politics card or to hypothetically create one. So for example:

Him: Angelina Jolie is such a good actress and a very morally-inspiring women. She’s really hot too.

You: Not my type.

Him: Why not? She’s one of the most beautiful women in the world, always winning prizes for it. Of course you’d want to date her.

You: She’s old, unpleasant and raising a bunch of other men’s children. I’m not interested.

He now has multiple lines of attack to pursure your verboten opinions and to make it personal. Such as:

Of course if you’re being attacked by a woman she’ll immediately find something about herself to personalise it along the lines of “you don’t like X. I am X, so you think I’m a bad person?” be it body fat, age, bastard kids, divorce, paper-shuffling pointless career, worthless degrees…… she’ll find a way to position herself as the subject of your “hate”.

Note how the stakes are raised. He/She is betting the farm that you will either (i) back down from your position because continuing your case can only result in a personal insult in an environment that punishes personal insults or (ii) say something that can be reframed as a personal insult precisely to trigger that punishment by her cat’s paws.

Step Seven: Condescending and self-congratulatory gloating (a) or immediately playing the defenceless victim (b)

So if you back down they’ll preen themselves now they are positioned above you or seek to record the “personal attack” as a “fact” which can now be actioned against you. Either way they’ve won.

Perhaps your first response is to think “no way are people that self-consciously manipulative” and if so, you’d be wrong. People are very devious. Just watch how naturally a pair of drunken bar thugs will execute a pincer movement on a victim with velociraptor-like telepathy. This stuff is hard-wired. The more oestrogen in a person’s system (i.e. women and gammas) the more likely they are to revert to this passive-aggressive aggressor-victim manipulation.

This tactic is writ large across the whole of society especially by race hustlers, feminists and the other Professionally Aggrieved and Offense Takers By Proxy. It’s utterly wicked because they know full well that the overwhelming social power is on their side yet they go out picking fights, little different to the packs of Pakistanis who go on the roam in Shadwell for solo white victims. The obvious question is how do I defend myself?

1. Don’t get set-up. The whole tactic is based on lulling a man into the killzone so learn to recognise the set-up. These gammas and women will throw out lots of little micro-tests to ping for your opinions. They’ll drop incidental comments expressing GoodThink then monitor if you enthusiastically agree or go silent – if its the latter they’ll mark your card for later. When you social acuity is tight you’ll spot these pings easily, as you’ll also spot the suppressed gamma rage / man-hate in their eyes and set of their jaw. I don’t rise to the comments and if they keep pushing I just tell them I don’t discuss that kind of thing at work.

2. Don’t take the bait. This should be obvious but when you feel the trigger being pulled, don’t do what they expect you to do. Don’t get involved. Make sure everyone can hear them needling you and trying to drag something out of you while you keep your opinions to yourself. If they are really insistent just call them out: “Just say what you mean” or “What are you trying to get me to say?”

3. Pull the Reardon Gambit. Assuming you got caught off guard and have now expressed CrimeThink in front of an audience, you are in damage control mode. Your best defence is to explictly and overtly describe the tactic back to the crowd by either being uninvolved: “It’s obvious what you’ve done. You pushed me into expressing an opinion publically precisely so you can take offense at it. I only told you because you asked. Stop playing these weird games and let me just get on with my job. I came here to work, not to play politics. You’re transparent” or if you’re sharp you can reframe them as the aggressor: “I don’t think this is appropriate for a professional environment. I’m trying to do my job and I think it’s unfair to single me out and try to publically shame me for privately-held opinions. People can see your game.”

Whatever happens just know this person had it in for you from the moment they marked your card. If you must play this game it’s best to just chip away at their frame daily with tiny getures and comments that position you above or outside their frame but never reach the threshold of being actionable against you. It’s a bitch move but if they started it it’s fun to keep shaking their reality for lulz.

Leave a Reply to I knit you a scnarf. Cancel reply