Girls are designed to derail the train.

It’s common to project our own thoughts and values onto others and to assume they share our outlook. The manosphere is full of much chortling at female rationalisations and solipsism such as how career women think men should value them for their intelligence, status and travel stories simply because that’s what the women value in men. It’s true. We men do have our own projection too though. Men are so completely notch-centric that we don’t fully appreciate how little women care about getting a new lay. They really don’t care if an interaction doesn’t lead to sex. They can walk away at any time. It’s only with tight game that you can get them invested enough to want to see it through.

A girl’s default programming towards sex with a new man is non-neediness. She will happily toss a spanner into the works at most inopportune moments because she simply doesn’t care if it all breaks down. A young hot girl will never run out of suitors. This Romanian girl was a hardcore derailer, worse than a band of WWII Ukranian partisans. She did the full inventory of derailments:

In my new book I go into detail on what I call “playing silly buggers”. It’s not a shit test per se. She’s not testing me for my value. This Romanian girl absolutely adored me and was like a meek little kitten in person, totally under my spell. But once she had the seperation of Whatsapp between us she became a derailment machine. So this was a long battle…. full of emotional highs and lows… and then I won. Go me.

It begins on Oxford Street three months ago when the sun is shining and the streets are rammed with 7s. As I pick my way through a crowd I catch the faintest of IOIs from a slim brunette going the opposite direction. She’s separated from me by about five feet and seven people but I’m alive to it and catch that sideways flicker of her eyes. I open with something accusatory for an easy hook. We chat five minutes and it’s electric. She’s a cat (more categorisation in my book) and lapping up the sexual energy so I bounce for the idate outside a nearby pub. We are propped up against the outside wall in mid-afternoon sunshine so I can easily test kino, build rapport and within an hour I’ve kissed her. It seems so on I’m looking for the SDL. We move to a second bar and I’m seeding the extraction then…. ring ring ring. Her boss calls to demand she attend a client dinner a couple of hours later. Everything fizzles. We swap numbers. 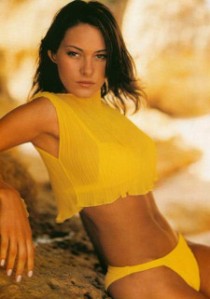 This sort of thing

As I walk her back to Oxford Circus she begins her silly buggers by crossing the street ahead of me and stomping along the pavement with a haughty expression while I hold my line on my side of the street. I’ve seen this game before. She wants to covertly induce me to following her. Nope, not me. After a few texts I quickly figure out her psychology. She loves to rub up against a guy’s manhood. Intermediates are easily confused by this because it’s pretty rare to find a girl who proactively and consistently does it and thus they mistake it for a shit test.

In dysfunctional form The Rub is why battered women provoke violence from abusive boyfriends. This girl wasn’t that bad, just a naughty minx. As we move to Whatsapp I see her profile picture is walking a rottweiler and she sends me a photo of her on the back of her cousin’s superbike. Yes, her psychology is clear – she likes bad boys. Curiously there’s a twist to her make-up because she’s also very intelligent and has a real job that requires real administrative skill. She lets on she’s read alot of the classics and surprises me a little with her historical and geographical knowledge.

By now I’m rubbing my hands in glee. She can only be attracted to men who have shedloads of bad boy dominance as well as well-rounded intellectual sophistication…. and how often does a girl find both in one man? My prediction turns out right – she can’t stop messaging me and is like a moth drawn to a flame. The whatsapp messages are tremendously entertaining for me with a constant stream of her poking her head up and me slapping it down. Logistics interfere horribly though and her business trip ends before we get a Day 2. She tells me she doesn’t like London and will not return. Bugger. This news comes when I’m in a run of extremely bad luck of sets collapsing due to forces beyond my control. I write her off but the banter is good enough that I’m happy to keep the text messages going.

I get a few semi-naked selfies. She tells me she’s had dirty dreams about me. I want to move things further along into authentic communication and deep rapport but part of her derailment is to hold things in a fizzy banter-ish mode. She’s constantly breaking rapport and avoiding connection. Ok, I’m not going to force it. I’ve basically reached the point where the only reason I’m chatting to her is to test out new material and to pester her for naked photos. And then she gives me the news: “I’m coming to live in London.” Game on.

Of course it was never going to be that easy. She claims her boss is constantly making her work late, and she has trouble house-hunting. Finally I get her out a week after she arrives. It goes great and she’s bubbling with sexual energy. We have a civilised tea and then a pint, make-out but she hits me with another my-boss-needs-me-back-now evasion. Two weeks pass then she tells me she’s leaving London soon. Bugger. It’s such a pain to arrange things but finally we agree on Whatsapp to meet on Friday.

Some of my recent sets

She tries one more derailment by messaging me an hour before the date along the lines of “can we postpone till next week.” I swear I nearly throw my phone at the nearest woman. I take deep breaths, compose myself, then tell her off. No, we won’t postpone and it’s too late to do so. So we meet in Camden.

And predictably, it’s completely on. I walk her around the market a bit, we have some street food then a coffee in the upstairs of a secluded souk. I have her tits in my mouth there and every fibre of her being is screaming “fuck me”. So I walk her to the bus stop. “I’m not going back to your place” she pipes up but gets on the bus anyway. Back in my house it takes about half an hour of battling until finally I fuck her. It’s not fast but it’s definitely furious. A very hot young minx. I’m pleased with this one.