I’ll admit I bit off more than I can chew. That is a constant in my life, as I’m also finding out writing volume three of the memoir (Younger Hotter Tighter). Projects seem so much faster in my mind. These Time Life books are each 175 pages long and those pages have plenty of words on them. Real books. Not like skimming a magazine. End-to-end that’s over 3,000 pages. Fuck me. Well, I want the knowledge so I’d better keep reading.

The totality of my ancient world knowledge, yesterday

One of my favourite bloggers, Vox Day, likes to say “immigration is war” and that there is no “magic dirt” that will turn a non-American into an American simply by having him change location. I agree with both sentiments but it was not until reading Barbarian Tides that I appreciate this is historically obvious.

The Left, you see, hates history. It’s always Year Zero with those clowns. The very last thing they want is for us to learn the mistakes of history. They’d much rather we repeat them. They are the People Of The Lie. [1] Thus Leftist history is always about airbrushing wrong-thinkers out of history and then ‘revising’ the record to completely pervert it. Hence all that nonsense about Shakespeare’s plays being written by a black woman, Mohammedans inventing science, that Constantinople is Istanbul, and so on.

Volume two of the Time Life series picks up circa 1500BC as the great Ancient civilisations are beginning to fail. Some are hit by natural catastrophes such as an earthquake and volcanic eruption rendering the Minoans vulnerable to barbarian Mycenean invasion [2], while others fell to internal decline such as the hated Assyrians losing their military prowess and being pushed back by the Hittite barbarians from the Eurasian steppe. The Egyptians also disappeared up their own arseholes when they first let a woman run them (Hatsheput) and later a gamma fag Akhenaten who was so full of himself he changed the entire religion from worship of Amun-Re to Aten and then tried to build a new capital city in the middle of nowhere. Naturally, that didn’t work out well.

Incredible that “gamma face” is clear even in stone sculptures

The meta-level trend emerging from this period of history is pretty clear. The near east, Asia Minor (Turkey, basically), and the Mediterranean was a hotbed of competing tribes and empires. As one grew dominant it would invade the land of it’s neighbours, and then be pushed back as the worm turned. Each time, the new destroyed what they could of the old. Temples smashed, people enslaved, languages disappeared and so on.

When one group was pushed out of their lands they would migrate to new lands, asking for tolerance and mercy (or just plain invade). They’d settled and then soon after overthrow the people who’d welcomed them in. For example, the Hittite barbarians were forced south from the steppe by a tribe of stronger barbarians. The Hittites settled in Anatolia, subjugating the locals, and then built their own empire. It rivalled Egypt in size and the two frequently clashed around Syria. Then a “sea people” [3] in 1300BC arrived and:

“Whoever they were and wherever they came from, the attackers obliterated the Hittite world, reducing Hattusa to ashes, smashing stone sculptures, slaughtering much of the population and driving the rest into exile. And so, in 1200BC, the Hittite empire vanished.”

This was a time of war, conquest and annihilation.

Here’s another lesson from history that the myopic Left would do well to learn: everyone was at it. It’s common for those of us raised with a Western education to think that it was the European empires that were evil. Colonisation is bad we are told. There is something unique and awful about Europeans and those of us around today must pay penance, or reparations, or just feel guilty for all these horrible things we did as colonisers. 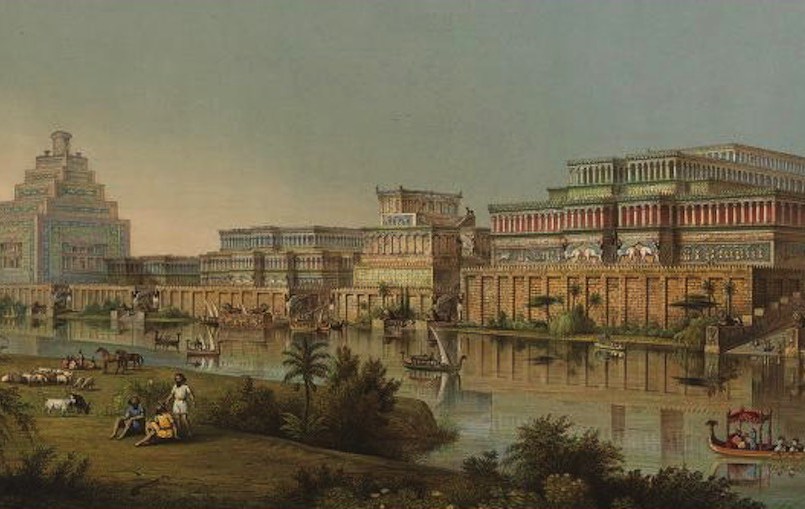 Nice civilisation you’ve got there. Would be a shame if someone SMASHED IT

Except, everyone was at it. All those other colonisers – which, frankly, is everyone throughout history – are wiped clean from memory. It’s the European colonisation that we should focus on, the Left says [4]

History truly is fascinating for putting things into context. For example, Christians make a really big deal out of the Exodus of the Israelites from Egypt in 1230BC, stopping off at Mt Sinai to pick up the ten commandments, then settling near the Dead Sea, from which they promptly engaged in exactly the same sorts of wars as everybody else. In the Christian world that little episode is a huge deal. In this book, it’s just a minor thread in a broad tapestry of warring empires and barbarian tribes. [5]

I’ll admit I’m struggling a little in my recall and sense-making of this era because so much of it is new to me. When reading about Egyptian pharaohs it’s easy to slot the new information or interpretation into what I’ve been taught already, same as more recent history such as Napoleonic Era. It’s rather harder to get a grasp of the Phoenician sea trading empire that founded Carthage in 900BC, or exactly how the Mycenaens became the Greeks, or how Etruscan city states merged with the Latins to become Rome [6]

I’m a little more educated in world history than I was a week ago, but I suspect there’s a lot more left to learn.

If you enjoy reading these reviews then you should probably leave a comment now and then because although my traffic is a little higher than usual I have no idea if my readership actually gives a shit. I had many requests for Count Cervantes-style content and now that I’m moving in that direction… silence. Which is exactly why I closed down Count Cervantes in the first place.

This is why we can’t have nice things

[1] Okay, Mr Triggered Socialist. I understand…. ooookay, so when socialism was tried in China it led to massive famine, economic collapse, millions of civilians murdered by their own government, spying that turned the whole country into an open air prison, and a complete destruction of civil society. Same thing when it was tried in Russia, Ukraine, North Korea, Venezuela, and Cuba. Next time it’ll be paradise! Next time!
[2] The Mycenaens themselves were smashed by the barbarian Dorians.
[3] About whom very little is known. They appear to have been raiders and pirates.
[4] Just as how the Left is obsessed with the trivial slavery of the US and blames all that on white Europeans despite the fact nearly all the slaves were sold to them by other blacks in Africa and that 90% of slavers were Jewish. And even then, the US/European slave trade was much smaller, far less brutal, and lasted a far shorter time than the Arab and Ottoman slave trades. Indeed, in Libya and Dubai it’s still going on today.
[5] Kind like you banging a pretty bird is a big deal to you, but she’s just one of millions of hot birds getting banged out that evening around the world.
[6] Is does seem pretty clear, though, that the Assyrians were utter cunts. They were the Ottomans of their era.