It’s natural when recounting stories to focus on the success and compress all the boring bits so you can get to the highlights. That’s what good story-telling is and when out in the pub with your friends it’s a sure way to a fun night. When you’re telling pick-up stories this compression has a few side-effects:

People hate the idea that they’re missing a trick. Pretty much every spam email offer that lands in your inbox is based on this psychological quirk, and thus they promise you the ONE EASY STEP to lose weight/ get a bigger dick/make your first million/bang hot chicks. Usually it’s some kind of new underground secret that “they” (the powers-thatbe) don’t want you to know but, for a limited time period, you have a chance to discover the secret.

Funnily enough, they aren’t far from wrong. They are almost right, but for the wrong reasons.

Most men really are missing a trick with women, there really is a “secret system” (or more correctly, some simple principles), and the powers-that-be really don’t want you to know it. The part where the Internet marketers tell a rather fat lie is about it being one easy step. It’s more accurate to call it four years of pain and struggle.

Philosophy departments have been teaching this one in Informal Logic classes for decades. As it relates to pick-up, you’ll tend to over-estimate the victory stories people parade in online forums and marketing letters and under-estimate the failure stories that you may have to dig about for to find. I’ll tell you right now that in the time period covered by this volume of my story, I failed with over two thousand women.

But unless I hammer the point home, you’ll forget that by the end of this chapter. You’ll focus on the lays and get the impression I was slaying right-and-left with wild abandon. Don’t say I never tried to convey the failure rate! So let me really drive home the point that game, for an average-looking man, is a grind. Failure is the base state and successes are rare blips that get creamed off to form the War Stories anthology.

I was hitting the streets every weekend throughout the summer and autumn of 2009 practicing the same direct opener time after time. On any given day I’d talk to between five and twenty girls, taking a couple of numbers and perhaps having an instant date (taking the girl onto a date immediately from the street interaction, without a break in between). Sometimes I’d get them out on dates later, but they’d go nowhere.

By September I hadn’t been laid for eight consecutive months, and I’d only kissed one girl. I’d probably spoken to about four hundred of them and had a dozen or so dates at least. It was always the same pattern— she’d turn up to the date quite keen and then gradually lose interest in direct proportion to how well she got to know me. They’d never seem to be in the correct position for me to go for a kiss and, if I ever tried to bridge the gap, I’d get artfully rebuffed. I pored over forums, books, and instructional videos but couldn’t get anything to work.

To be fair, there was no good instructional material out there for dates. The PUA literature that gave direct practical advice was focused entirely on the initial meeting in the bar or club. Once you had the phone number you were left to flounder with just a few simple highlevel principles. That’s all changed now, and there’s some excellent “date game” material that breaks it down to micro-level actionable advice. But in 2009 it was all shit.

The biggest problem, though, was my ineptitude. I didn’t have any confidence that I knew how to move a girl towards sex (“escalation”) and I didn’t feel attractive. I’d go on dates thinking I still needed to convince girls to like me and my lack of self-belief would seep out. I still had all the broken pieces jangling around inside, the after-effects of divorce. But I was impatient to get laid, so I kept reading, and eventually I stumbled upon a blog post describing the Apocalypse Opener.

The writer swore that this was a fool proof way to get laid. Just do it right with enough girls and one of them will bite. Okay, I’ll try it. I wasn’t lacking dedication. It goes like this:

Me: What are you up to now?

Her: Blah blah, whatever.

Me: Would you like to come home with me?

The key (apparently) is to look her dead in the eye and hold your fucking ground. She’ll be taken aback and then scrutinise you briefly for any wavering. And then, sometimes, she’ll just agree.

Like most pick-up advice it’s really a part-completed sentence. The instructor says something like, “This really works” when the full sentence is “This really works… if you’re already the sort of guy who gets laid quite easily.” I tried it about twenty times and got nothing. Really, what did I expect? The most memorable of them was with a sexy Greek ballerina I had met walking outside the National Portrait Gallery in Charing Cross.

It was September 5th, 2009, Saturday afternoon and my mother was visiting London so I did the honourable thing and met her for lunch and coffee. I was totally open with her about my new hobby which she was obliquely supportive of. She was rather contemptuous of my ex-wife and viewed me as the aggrieved party. She’s also a psychologist and a realist so she wanted her son to get himself together and meet some girls. After she went off sight-seeing I met up with an Indian guy called Sai who had been winging with me recently to squeeze in an hour’s street work.

The very first girl I stopped was the Greek dancer. She had shoulderlength brown hair, slim muscular legs, and denim shorts. I got in front of her and opened:

She smiled, muttered thanks, and I hit her with the ONE EASY STEP: “Would you like to come home with me?”

“Cool. I normally go to Starbucks myself. I like the coffee of the day though, to be honest, if I’m gonna spend a long time in a cafe I normally do Caffè Nero because they have those lovely distressed leather sofas… blah blah… bullshit.” 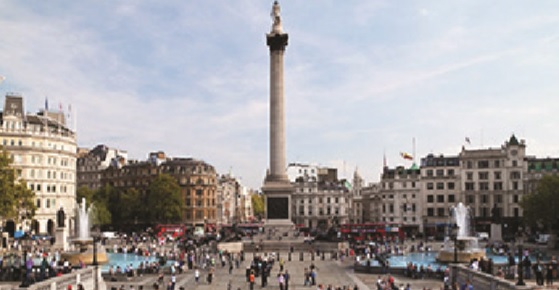 One of London’s great daygame beats

She invited me to walk with her, and we headed down to Trafalgar Square.

The next installment (Chapter three, part two) will be posted in three days. For the full Balls Deep in PDF for £10 go here, and for the paperback for £20 go here.