I met my wife in late 1999 at a London bar on a normal Friday night after work. I was training as a finance professional with a top tier City firm so life was quite stressful but full of optimism about my future career. My university friends, Tim and Yasin, were now highly-paid computer programmers and worked nearby for an investment bank. So when 6pm rolled around we’d have a few beers. Young professionals enjoying that great city of opportunity for new graduates.

We stood outside Brown’s wine bar by the Bank of England surrounded by other blue-shirted office drones sipping lager. A few pints later we were in an old man’s pub in nearby Old Street. Tim was playing the slot machine by the door and hit the jackpot just as the door opened and three Japanese girls walked in. My head turned as I heard the put-put metal cough of the machine dumping coins into the collection tray and my eye caught the middle girl. Very pretty.

Enveloped in a drunken haze I did something I’d not done since late night in student nightclubs—I walked up to a girl I didn’t know, tapped her on the shoulder, and hit on her. Incredibly, it worked. She gave me her number and then three dates and two weeks later I was fucking her. Six years after that we were married.

Of course, a lot happened in between—me living in Japan for four years as first a high-school English teacher then later as a fight journalist and a kickboxer, her joining a professional dance company and touring the world as a performer—but that’s just boring “origins” stuff. Let’s just get to the main point.

I was with my wife a total of nine years and for the first eight of them it was perfect. Like a Disney romance movie. We had holidays together in Thailand, Turkey, and Tunisia. We moved in together in London in 2006, and I really thought that was it. I’d found the love of my life, we’d have children, and we’d grow old together. Job done. Now I just had to mature, settle, and be a good husband.

It started to go wrong in early 2008 when she got antsy about giving up her dance career to have children. She’d been putting me off for two years with the excuse, “I want more time as a girl, before I become a woman,” and I was starting to doubt she’d follow through. She was also showing reticence in moving to Newcastle with me to buy a house and settle. Then she decided she wanted an office job after two years as a housewife. There’s blame on both sides and it doesn’t really matter now but, suffice to say, 2008 was strained. She changed, I changed, and the marriage was strained.

happily married and thinking it would last forever

With the benefit of hindsight I should’ve seen it coming. She went back to Japan in January 2009 for two weeks to visit family. On the day she was due to return to London—nothing. The next day she called me from her friend Andrea’s house and said that she wanted to meet me after work. I felt my stomach drop. I couldn’t believe she’d leave but my body knew what my mind wouldn’t contemplate.

Even now, over five years later, the image of her walking towards me down the street outside my office is burned into my mind. We sat down in a pub and she told me she needed space. That space became separation and ultimately divorce. I was against it and did everything I could to convince her to stay. Again, hindsight is 20/20. She did us both a favour, but it would be well over a year before I’d see that.

She’s happily remarried now (to a former best friend of mine from university—a long story!) with two children. We’re still on speaking terms though we rarely ever do speak. She chose her path after divorce and I chose mine. And here the path began—single, loveless, frightened, and broken inside. I felt like a glass vase had been shattered and now rattled around inside me.

I remember lying on my sofa in a squalid little two-bedroom flat in Kennington, Xbox360 controller in my hand as I played Battlefield Bad Company. I’m a video game nerd and a sucker for first person shooter games so this should’ve been a perfect evening’s entertainment. But I couldn’t enjoy it at all. Everything seemed so dull and pointless. My life seemed dull and pointless. I turned the game off, shut my eyes, and did some serious introspection.

What was so wrong? Why was I so unhappy? 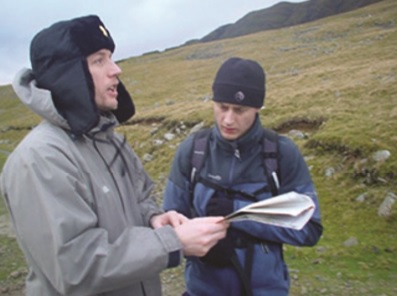 Hiking with my brother a couple of months before the separation

My university friend, Charlie, had gotten divorced six years earlier and never remarried, or even had a girlfriend. He’d foresworn women (which didn’t take much as he was hopeless with them anyway) and dedicated himself to scuba diving trips around the world. I knew intuitively I couldn’t do that. It was giving up. I’d never quit anything in my life.

So I had to get a new girlfriend. I wanted sex. I wanted companionship. But how could I do it? I’d had a short experiment with online dating as soon as I’d recognised my divorce was final. Match.com had resulted in one date with a mid-thirties English woman who turned out to be rather fatter than her profile pictures suggested. I’d fallen back on my old “in”—Japan—and signed up for JapanCupid.com but that led to three uncomfortable dates with post-thirty girls I didn’t fancy.

Then I cast my mind back to a book I’d read some six or so years earlier called, The Lay Guide, by a man calling himself Tony Clink. It was a paperback in the HMV book collection in amongst the rock star biographies and Hunter S Thompson diaries. That had been my introduction to the Seduction Community, a guidebook on how to get laid. I’d read it and compared his advice to my own successes and failures. While not remembering much of the book’s content, I did come away with an overall favourable impression. I’d thought, “I can see that working.”

But, of course, I was in love with my soon-to-be wife at the time. My job was already done. I didn’t need that stuff. Until now.

So as I laid back on the sofa with my eyes shut I started idle speculation. Could I become a pick up artist? Could I walk into a bar and leave with a fistful of hot girls’ phone numbers then get them out on dates the next week. It didn’t seem very likely for an average-looking thirty-five year old man. How was I going to compete with all the good-looking guys, the rich guys, the young guys? Last time I’d been to a nightclub I felt completely out of place. I felt old, and it seemed everyone else was having more fun than me.

But perhaps I could use it to get a nice girlfriend. A pretty late-twenties girl would be fine. Maybe she would fill the void in my life and I could go back to what I’d been doing.

It should be quite obvious that my mind-set was all wrong. I wanted an easy solution without having to change anything significant in my life. I was refusing to learn the main lesson of my wife leaving me— that something was a bit wrong with me. We’ll get to that as the book progresses. I avoided learning that lesson for a long time.

Four days later the brown cardboard Amazon package thumped onto my doormat, and I had a fresh copy of The Lay Guide. I read it on the toilet at work, devouring every page. I was determined to give it a try. I’m pretty earnest when I commit myself to a new hobby (and this was basically to become a hobby). For the previous two years my hobby had been global economics (I shit you not!), and I’d been obsessional in reading blogs and dozens of dry academic books until I’d cracked the code and figured out how the economy works. As with Game, I accepted I was a clueless beginner and was willing to humble myself and start from the bottom floor.

The Lay Guide explained to me there are three types of game:

The absolute low point, a month after the separation

I’d eventually experiment with all three types but, as you’ll see, I quickly gravitated to day game. Once I’d finished with Tony Clink (and writing my own flashcards of his salient points) I moved on to the next books, the most famous of which is The Mystery Method. I still swear by this tremendously misunderstood tome. Unlike most newcomers, I didn’t go through a long “theory phase” of consuming dozens of books and instructional videos before actually going out and talking to girls. Right from the beginning I knew that was just avoidance—a way to delay the anxiety felt by approaching a girl you don’t know. Instead, I just read The Lay Guide, The Mystery Method and The Game. Within a fortnight I was itching to hit the streets.

Next installment (Chapter One part two) in three days. Balls Deep full book available in PDF here for £10 and paperback here for £20